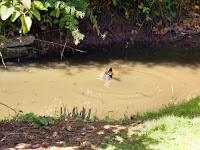 About 3 years ago we were lucky enough to have a pair of poule d'eau or as we know them moorhens take up residence on the pond in the back garden, next to the potager.
Each year they have produced offspring which are always cute to watch as they learn to swim and grow at an alarmimg rate.
This year however there were no baby moorhens in June although the adult birds were still coming to the back door every morning to be fed.
Imagine my delight therefore on Saturday evening, as I watered the vegetables, to discover the very proud male moorhen strutting around the potager squawking away to announce the arrival of his chicks.
Mama was sitting proudly on the far bank as tiny little balls of black fluff scurried hither and yon, testing the water, before rushing back to safety and burrowing beneath her wing.
Taking a photograph to share has not been easy, they're still camera shy, even papa went under the surface as I snapped but I did manage to capture one fluff ball for you to see.
Posted by Maggie at 06:24:00 No comments: 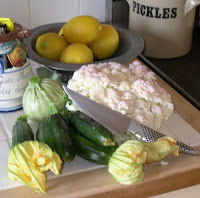 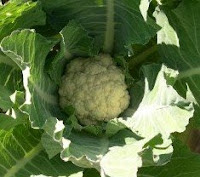 All things in the potager are flourishing and we are enjoying freshly picked vegetables and salad everyday.
Yesterdays supper included chou fleur & courgettes and tonight I'll serve the first tiny new potatoes which I dug up less than 15 minutes ago.
Bon appetit
Posted by Maggie at 02:39:00 No comments: 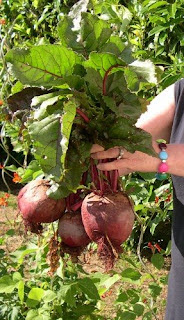 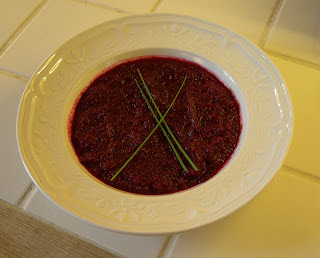 This is the first year that I have grown beetroot, I bought the young plantlets from a vendor at the local market in Le Molay Littry so can't claim all the glory but am pleased as punch with the results.
The first ones I harvested were cooked simply - skin on, tops cut off and then peeled & sliced, we ate them cold with ham & cheese but this week feeling a little more adventurous I made beet soup adapted from a Fearnley-Whittingstall recipe which I found in a magazine.
Delicious!
Flushed with success I've bought some beetroot seeds and hope to grow my own plantlets for a second crop.
Bon weekend a tout
Maggie
Posted by Maggie at 00:34:00 3 comments:

Drama but not a crisis! 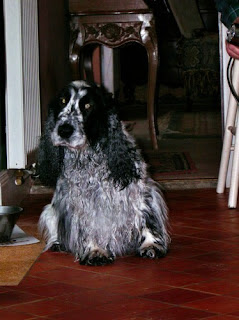 Breakfast preparations came to an abrupt halt at 07.45 am today when as I briefly glanced out of the open door I saw our cocker spaniel, Ben, struggling but failing (!) to climb out of the pond in our front garden!

He must have walked around this pond at least 5 times a day since he came to live at the Presbytere (almost 8 years ago) and this was the first time he had ever taken a dip.

I don't know who received the bigger shock him or me, or maybe it was my other half, Roger, as I screamed "Ben's fallen in the pond".
Now, this pond isn't an attractive feature in the garden, the only thing pretty about it is that it's pretty yucky, so when I finally yanked Ben out of there he was in a very digusting state, not what you want to deal with just before your petit dejeuner. 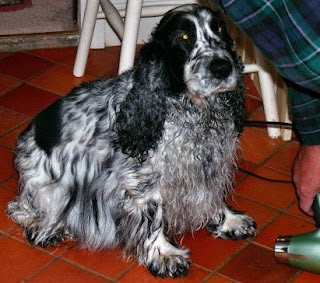 I'll spare you the details, suffice it to say we gave him a very thorough bath using the outside garden hose & masses of doggy shampoo.
Roger then dried him off using my hairdryer until he resembled his former self.
The pix show just what Ben thought of that.Hope you're day get's off to a better start than ours
a bientot
Maggie
Posted by Maggie at 00:39:00 1 comment: