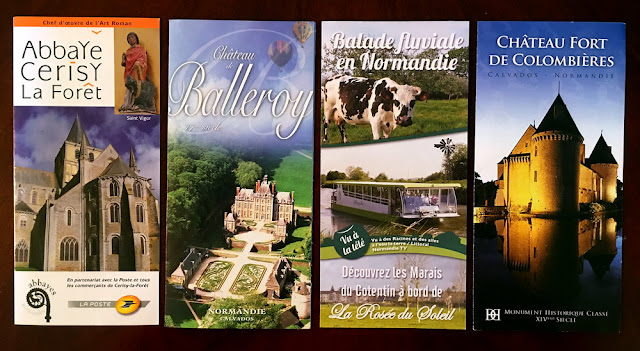 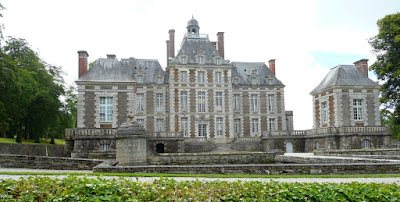 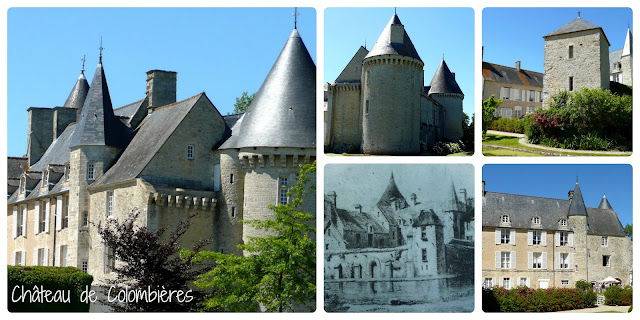 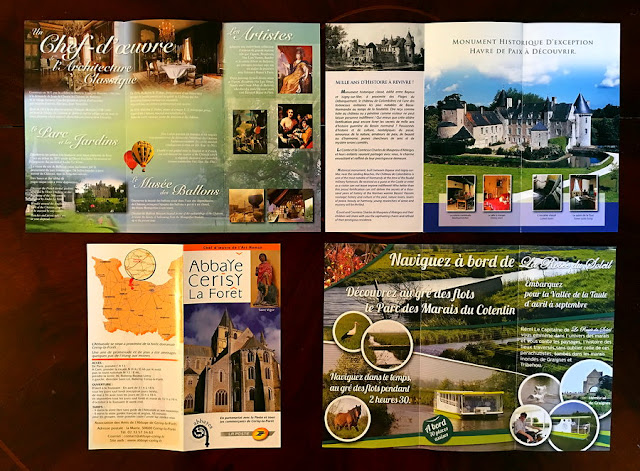 The response to my MM # 31 post on vintage French enamelware was wonderful, thank you, and I'm not at all surprised to find out that we're all chineurs one way or another.

I really enjoyed reading about all the eclectic and diverse things that appeal to you.
Whether it's ceramics, dolls, photographs, Beatrix Potter or Belleek china, tea cups or vintage linens, we do enjoy thrift/charity shops, garage sales, antique fairs and auctions.

I particularly enjoyed these two comments:
from Jo Ann (Scene Through My Eyes) "I think my collection of friends is the best one of all" and Sallie (Full Time Life) "one of my pleasures in blogging is "meeting" new people and seeing other ways to live the good life".
So true!


For you, my lovely friends, my mosaics today are of some quirky and delightful treasures discovered whilst bargain hunting in Normandy and Brittany.

Don't laugh, I packed this collection of Banania tins away when we painted the dining room about seven years ago and haven't seen them since. I can't, for love nor money, remember where I put them.

I found these crystal glass display pieces about 15 years ago, I think they're lovely but can never figure out the best way to use them. The only way to display flowers in them is to cut the stems very, very short and almost float the flower heads in the water. 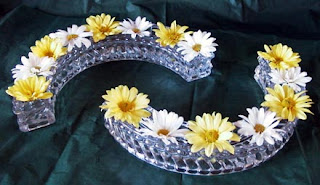 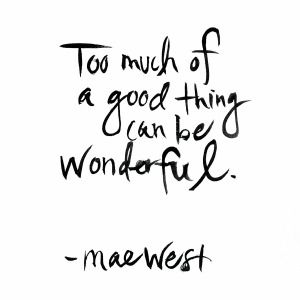 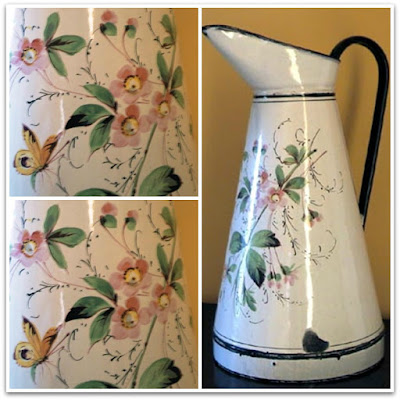 Spring has definitely arrived here in Normandy but one of the things that I look forward to very much at this time of year has nothing to do with the garden or the weather. 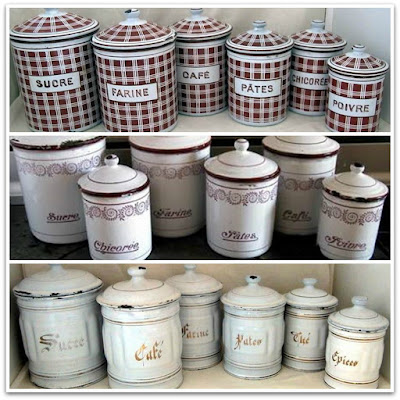 One of my favourite pastimes at the weekend and on public holidays is to spend time wandering around vide greniers, brocante markets and antique fairs on the look out for beautiful objects to add to my collection of all things vintage French..
(When I first began to collect Quimper faience in the '90's I was lucky enough to meet Millicent Mali, a respected Quimper expert and author, at an antique fair in Brittany who kindly explained that the French word for antiquing is "chiner" and we are all  "chineurs"!) 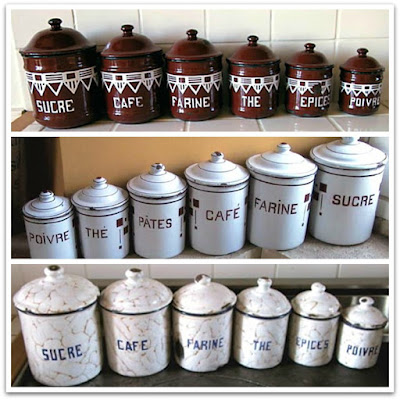 What is a collector?
- someone who collects objects because they are beautiful, valuable, or interesting according to the Cambridge English Dictionary.
The Merriam Webster definition is not as complimentary: a person who collects certain things as a hobby, a person whose job is to collect something (such as trash or money) ! 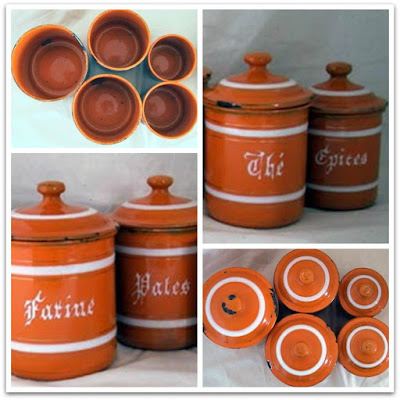 Well, beauty is in the eye of the beholder so they say and what is one man's trash is another man's treasure. 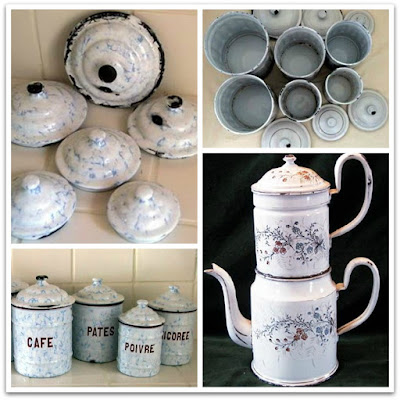 My mosaics this week feature some shabby chic beautiful French enamelware that I've enjoyed here at the Presbytère before finding them new homes with other collectors. 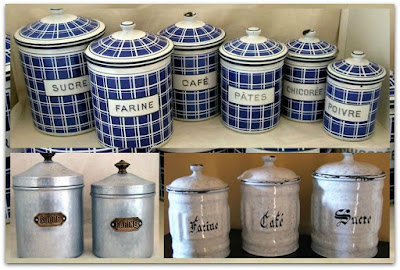 I can still find vintage French enamelware at reasonable prices now and again but "kitchenalia" seems to have become very popular souvenir of tourists visiting Normandy and the competition is tough.

"Enameled Kitchenware" by Pikul & Plante is a book that has helped me a lot with my research into the many different designs, styles and patterns that I come across.
It contains a wealth of information on both European and American enamelware. 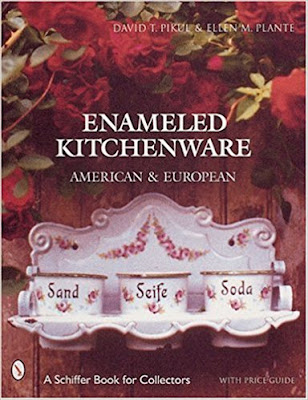 I checked and it is still available from amazon, the photographs and descriptions are excellent but I don't know if the price guide is still relevant to the marketplace.

Are you a collector too, what do you collect? 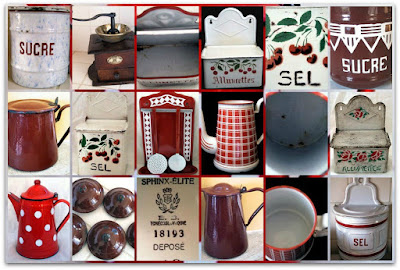 Please let me know, I'd really enjoy hearing what it is that you will be searching for the next time you go out to chiner.

Sending you all a bunch of spring daffodils as a big thank you for all the lovely comments and well wishes left on last week's MM post.
I'm glad to report that this week has been quite uneventful, without a hint of the drama of the previous one.

Mosaic Monday
The North wind doth blow and we shall have snow
And what will poor robin do then, poor thing?
He'll sit in a barn and keep himself warm
and hide his head under his wing, poor thing.
English Nursery Rhyme.

The weather has been very changeable all week, one minute blue skies and sunshine the next hail storms and thunder.
You may remember that I recently purchased some Bach's Rescue Remedy to help M'selle Fleur cope with stress caused by loud noises, just three or four drops onto her tongue followed by a biscuit treat does seem to have helped to calm her down during a storm.
Also, I think that hunting season must have ended as we've not heard any guns for a while. 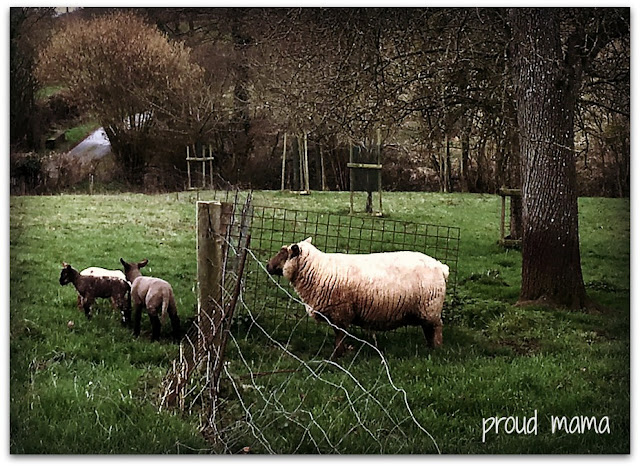 The proud mama with lambs belongs to our friend and local shopkeeper, Jacques. He keeps four sheep in the field next to his store. Three of his sheep have delivered five little ones between them so far with another set of twins expected from the fourth one soon.
In March I usually start to think about the coming season and what I might grow in my potager/ vegetable garden which I can see from both the kitchen and sitting room windows.
There's something so hygge (Danish for cosy) about sitting in front of a log fire browsing garden centre catalogues and gardening books whilst the rain lashes down outside.
(click here to find out  how to add hygge to your life) 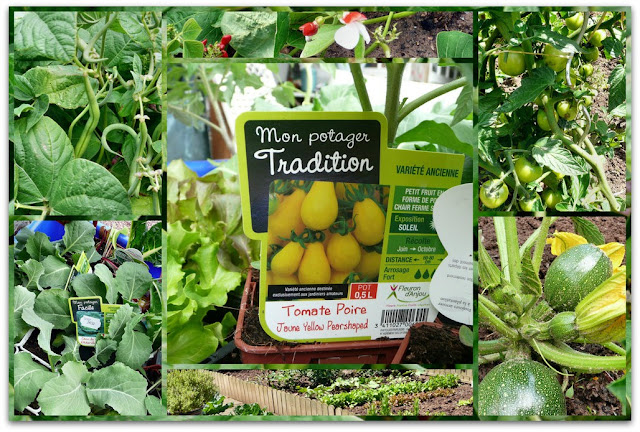 This year though it's all change, I've regretfully come to the conclusion that growing vegetables in the potager will be too much like hard work for me from now on.
I am keeping the bed which is sheltered by the wall so that we can keep the golden raspberry canes and various herbs to be used in cooking. 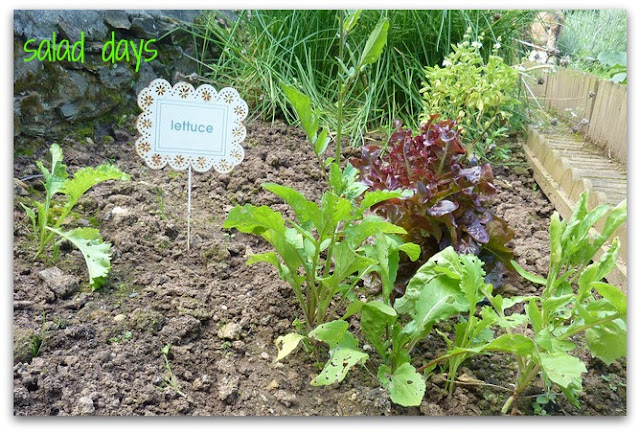 I'll keep a space free at one end for planting lettuce seedlings which I'll buy at the local market and maybe a couple of pots of tomatoes too, just so I can keep my hand in. 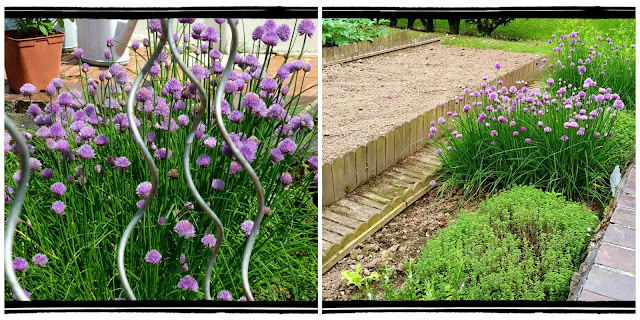 The other two beds will get dug over, weeded and seeded by Sean the Gardner next month to create a new lawn, shaded on two sides by the laurel hedge it will be the perfect spot to sit and enjoy afternoon tea.
Are you dreaming of warmer days and making plans for your 2017 garden, will you be making changes too?