We have a very generous neighbour, I've mentioned him before, who has some wonderful fruit trees in his garden.
August is the month when he picks the plums and a few days ago the Senior Partner returned from a walk with M'selle F with a box containing some of this year's harvest. 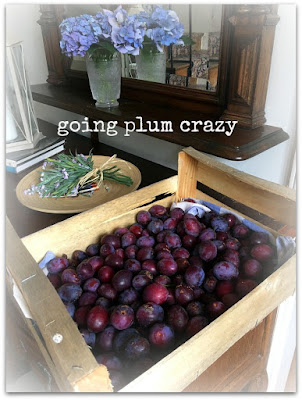 This is the second year that we've been lucky enough to share his garden's bounty, last year I made several jars of plum jam. 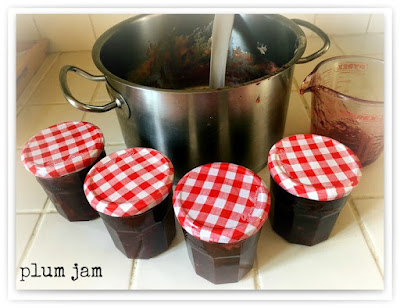 This year I got busy in the kitchen and turned them into plum and preserved lemon chutney, plum compote and a delicious pudding of plum crumble. 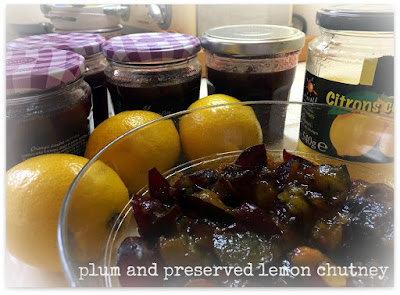 Here's a link to the BBC good food website where you'll find the recipe for the chutney. 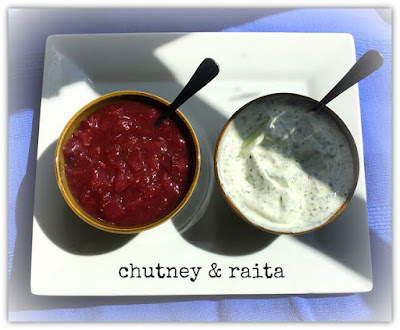 Like most chutneys the flavours will deepen and mature with time if you can hold off eating it that is!
We were in a hurry to try it so I served some chutney and a cooling mint and cucumber raita as condiments to the chicken curry which the SP made for dinner earlier this week. 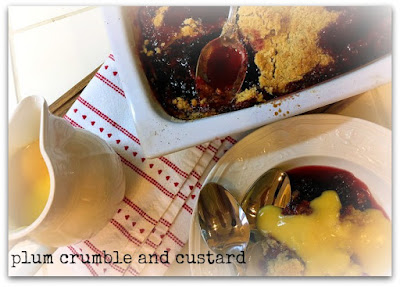 A favourite "afters" from my childhood, plum crumble and custard is also a comforting "once in a blue moon" grown up dessert too. 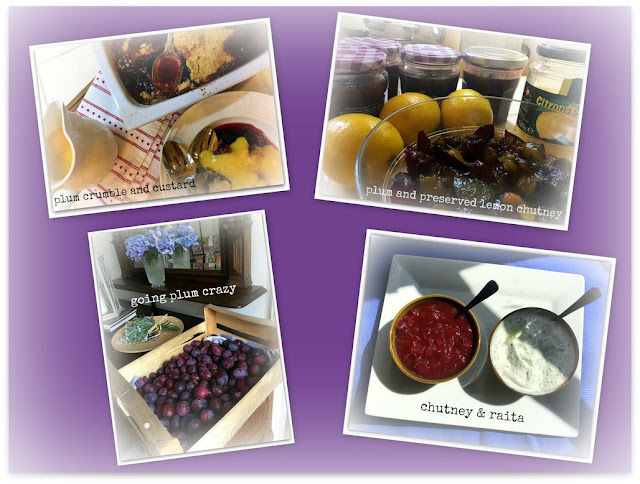 What's your favourite dessert? Do you still hanker after a childhood favourite or do you have a more sophisticated palate?
I'd love to hear what delights your taste buds and satisfies your sweet tooth, I'm thinking that chocolate/ice cream will be involved for quite a few! 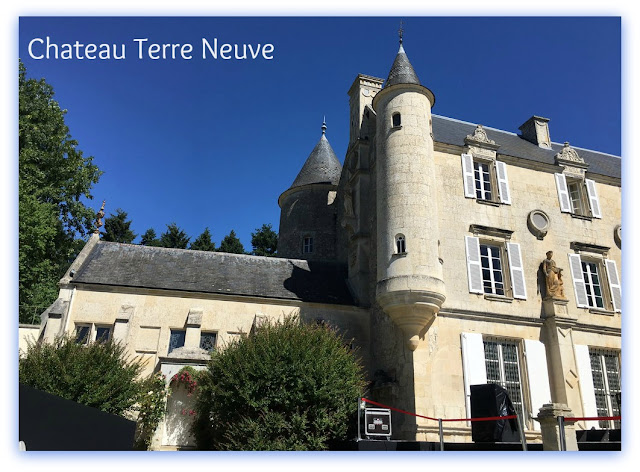 During our trip to the Dordogne and the Vendee in June we heard about the privately owned Chateau de Terre Neuve, open to visitors at certain times of the year and so decided to make a small detour to see if we could take a tour.
Classed as an Historical Monument of France the Chateau is situated on the outskirts of the town of Fontenay-le-Comte, a town once described by the Renaissance king  Francois 1st as "the fountain and source of beautiful minds".
We were in luck as we were the only people visiting that morning and so had the services of the tour guide all to ourselves.
An plaque above the entrance is engraved with a verse written by Nicolas Rapin.
Here's a five minute potted history of the Chateau.
The architect Jean Morrison was commissioned in the late 1590's to construct an imposing residence for the poet Nicolas Rapin.
A true Renaissance man Rapin wrote poems in Greek and Latin as well as French.
He was also, amongst many other things, a magistrate; a soldier; high provost of the constabulary of France and a companion to Henry IV on campaigns during the French Wars of Religion.
At Arques in 1589 against Charles of Lorraine and again at Ivry, Normandy against the Duc de Mayenne in 1590. 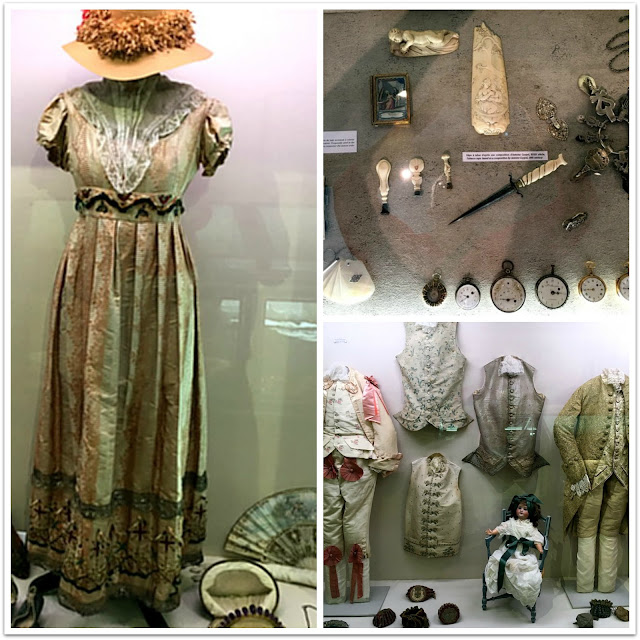 Nicolas Rapin was the father of nine children none of whom survived him so sadly when he died in 1608 the Chateau fell into neglect before being bought by Lazarite missionaries. 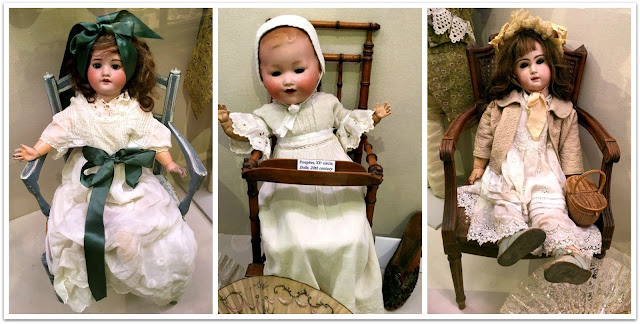 In the early 19th century the Chateau was purchased by the Comte de Vasse, mayor of Fontenay-le-Comte and deputy of the Vendee. 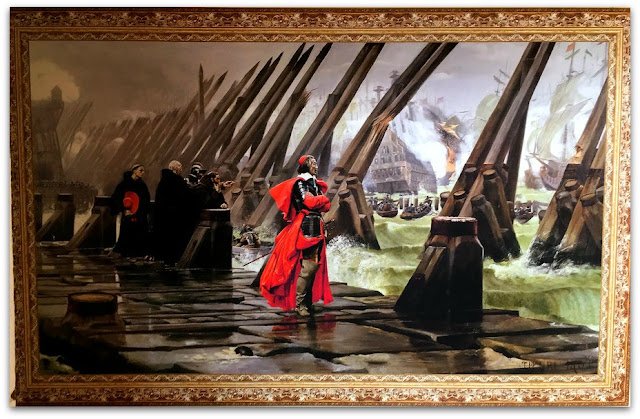 His descendant, the artist Octave de Rochbrune, dedicated over 50 years to the transformation of the Chateau adding magnificent architectural and sculptural details and filling the interiors with museum quality furniture, paintings and objects. 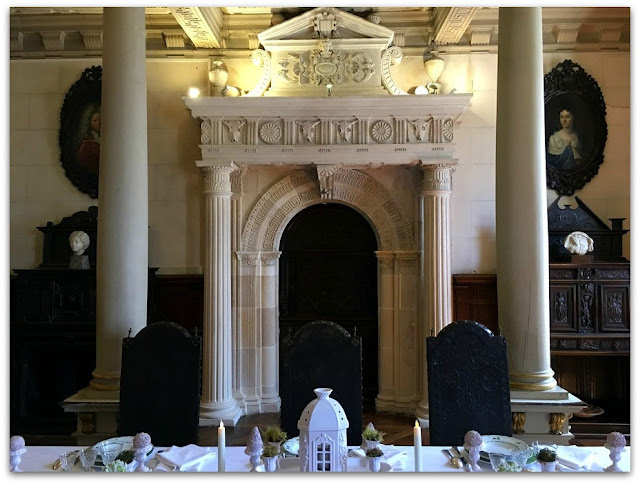 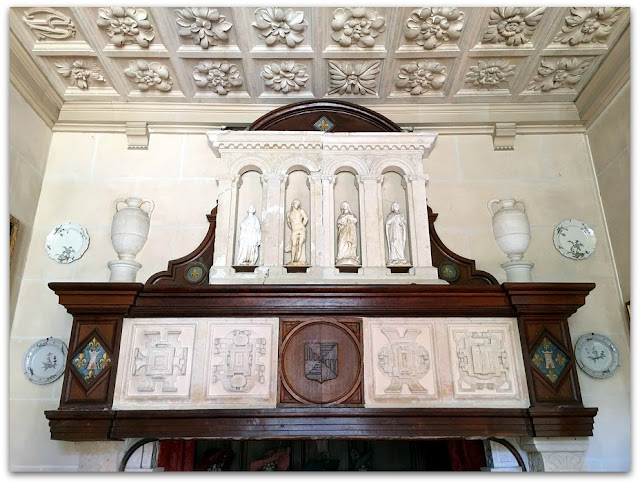 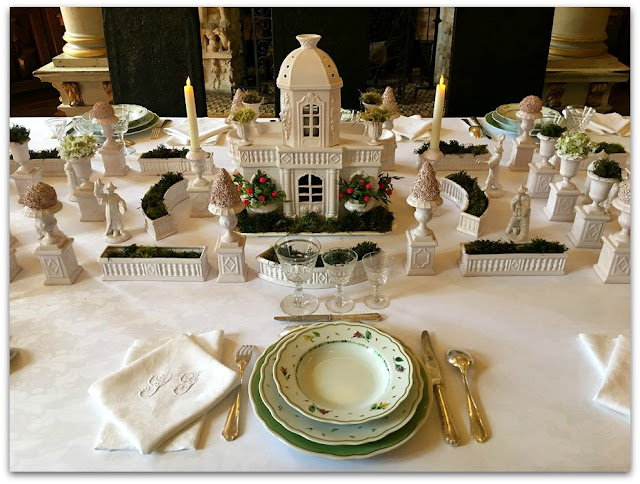 Some of these were acquired from the Chateau de Chambord which is still to this day a jewel in the crown of the Loire Valley. 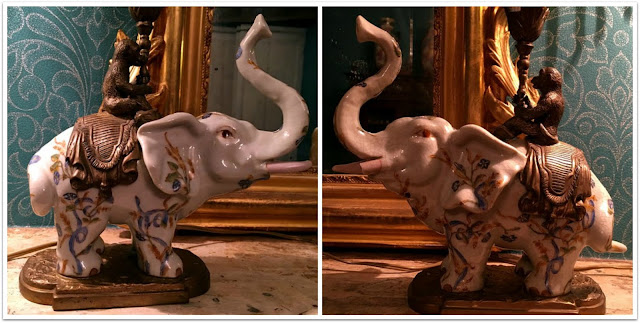 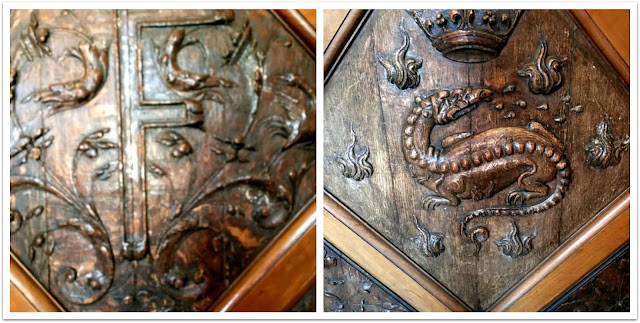 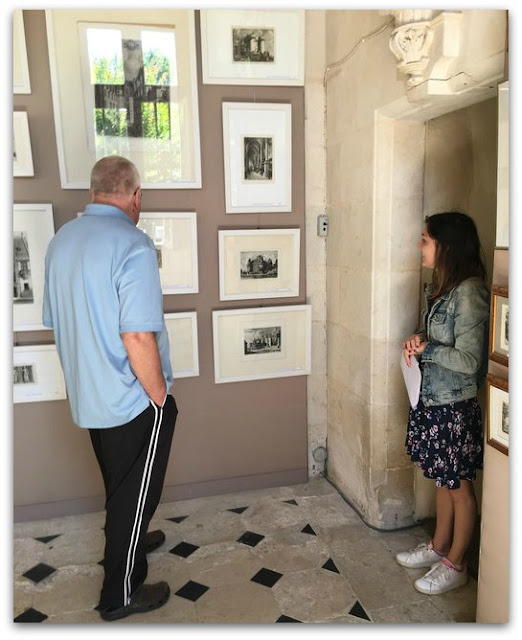 Octave de Rochbrune was a master engraver producing an incredible 492 copperplates during his lifetime. 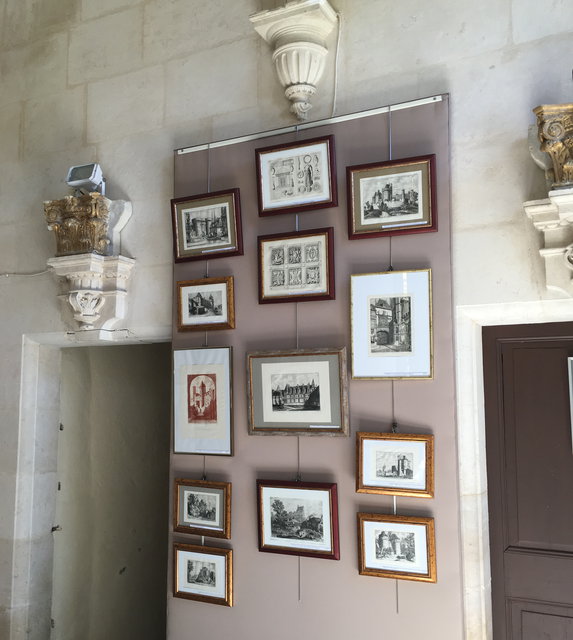 Octave's daughter Elisabeth married Count Raoul de Fontenioux in 1877 and their descendants continue to reside in the Chateau lovingly maintaining it for future generations to enjoy.
Of course the Chateau is a also a home and so all though we were able to visit the private rooms downstairs taking photos wasn't allowed. 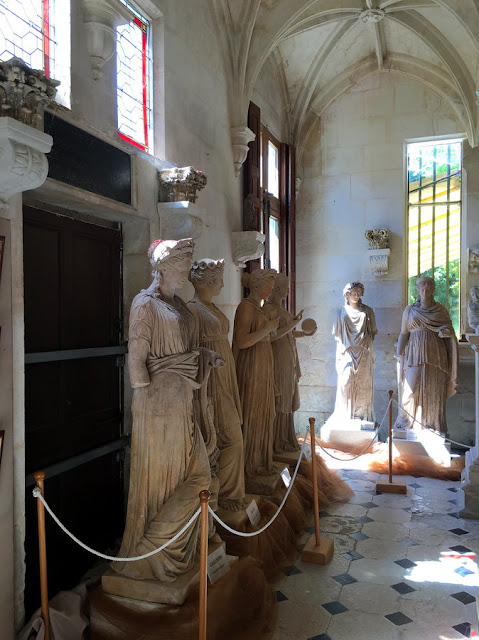 However, I was able to photograph some of the other rooms of the Chateau, also in the Museum space above the gift shop and of course the Chateau's exterior. 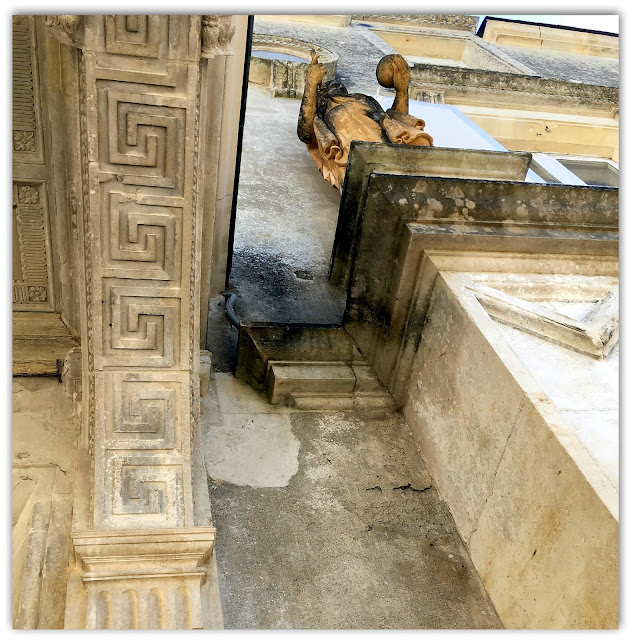 During the Terre Neuve Festival in June this year the Chateau played host to 5 open air theatre performances, you can see the stage being built in this photo. 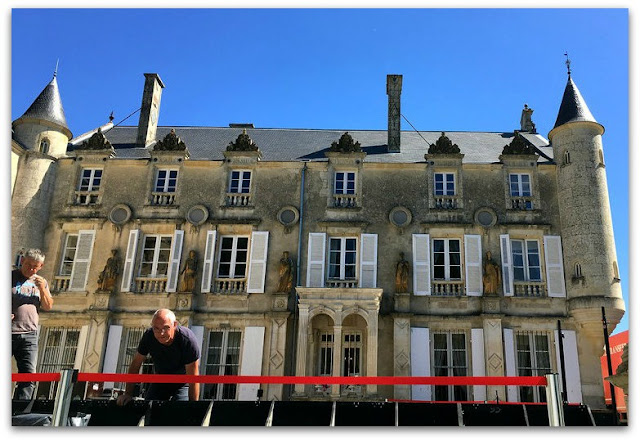 Two weeks ago the temperature in Normandy reached a blistering 30*C (98*F) making it the hottest summer that we've experienced here since we arrived in 1996.
The lawns are scorched and my hydrangeas wilt a little bit more every day.
Although I've not read anything regarding a hosepipe ban in Calvados this year there was one in place in 2017, my garden pot plants are surviving on waste water from the kitchen sink.
To top it all off M'selle Fleur got a bad case of the "itchy scratchies" a,k,a heat rash.
Usually the Senior Partner would use the hosepipe/shampoo in the garden method to relieve her itches with the foreseeable result of all three of us getting drenched and hot and bothered at the same time.
This year instead we called upon the services of the Mobile Toilettage lady. 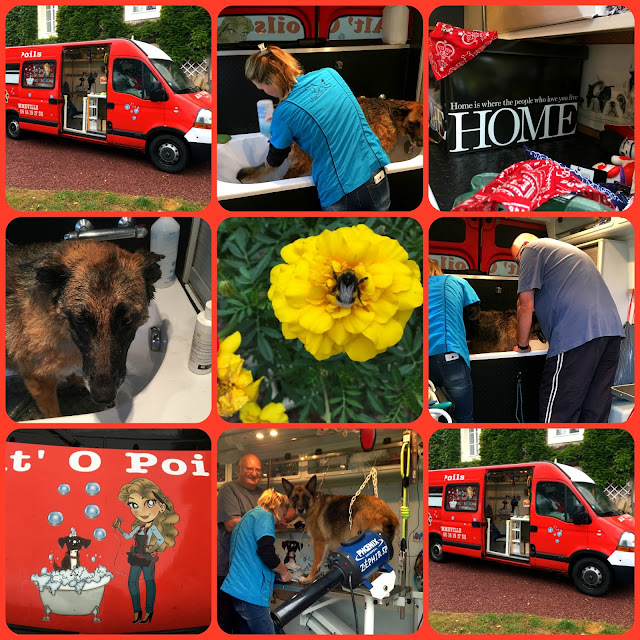 M'selle F was not best pleased but it was far less stressful for us. Unfortunately the itchiness doesn't seem any better but she sure smells nice!

Yesterday I took this photo of the cows in the field next door, looks like summer just might be over now.
You may have noticed that after 2 years I've tweaked Mosaic Monday's opening hours to fit better with my schedule and hopefully yours too.
We're open now from Sunday 11.00 a.m. to Monday 11.00 p.m. French time.

Mosaic Monday # 95 - how time flies when you're having fun

Last week, 1st August to be precise, I celebrated two years as host of Mosaic Monday and let me say what a great time I've had doing it.
Feeling slightly nostalgic I took a little look back at the previous 94 MM posts (ninety four!) and totally enjoyed revisiting the past 24 months. Time really does fly when you're having fun.
BTW, if I've written 94 MM posts that could mean that you have too!
One thing I quickly realised was that I blog quite a bit about food, travel, family, travel, Normandy and a bit more travel!
I picked a few out at random to share with you today, if you'd like to read the original post just click the highlighted link.

Autumn in the garden 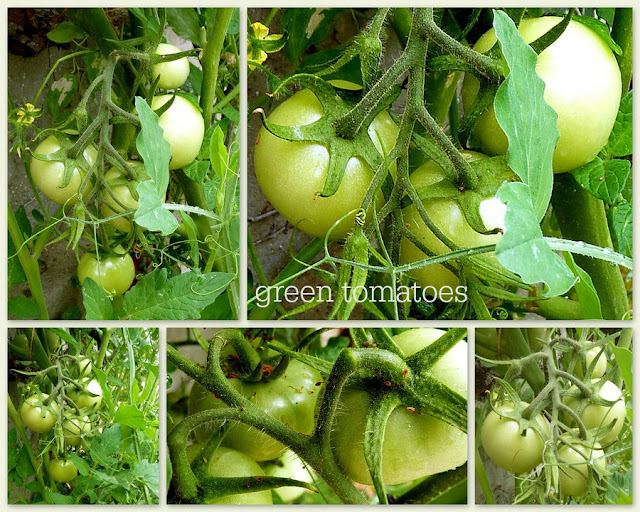 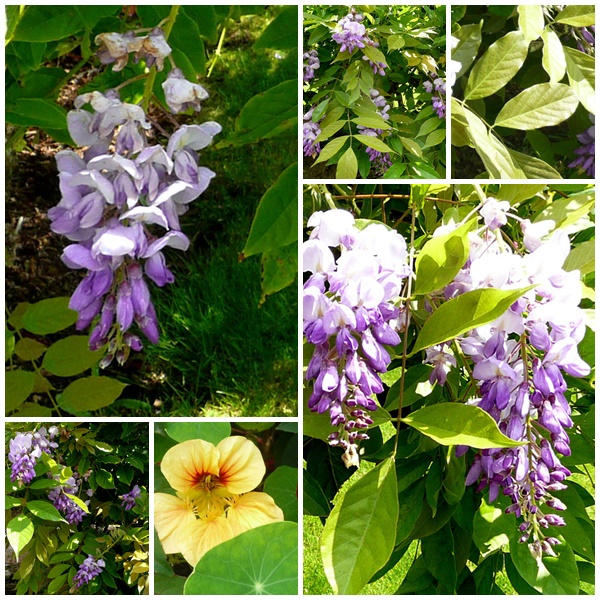 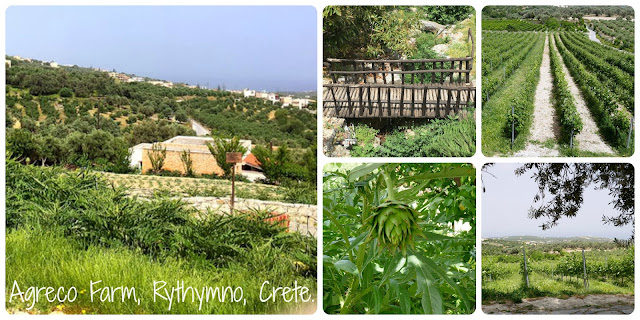 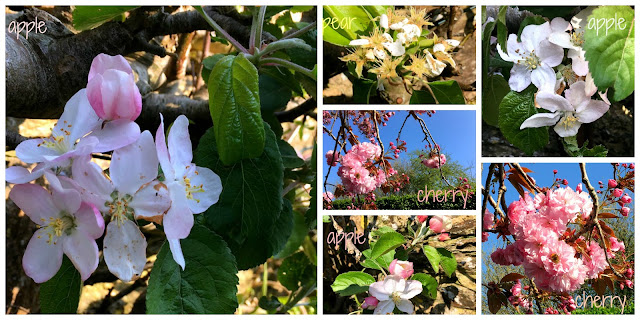 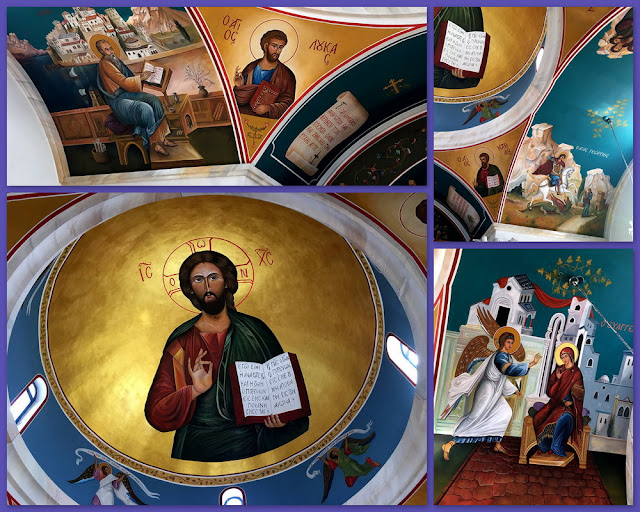 It's all about family 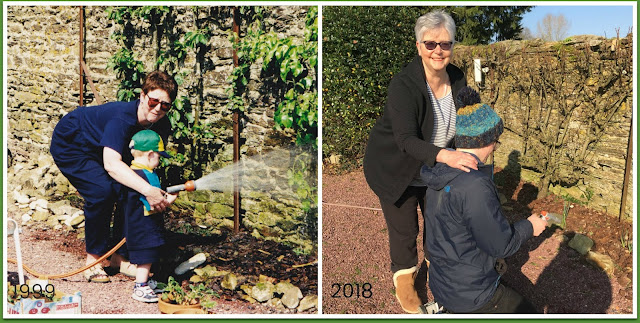 so then this happened 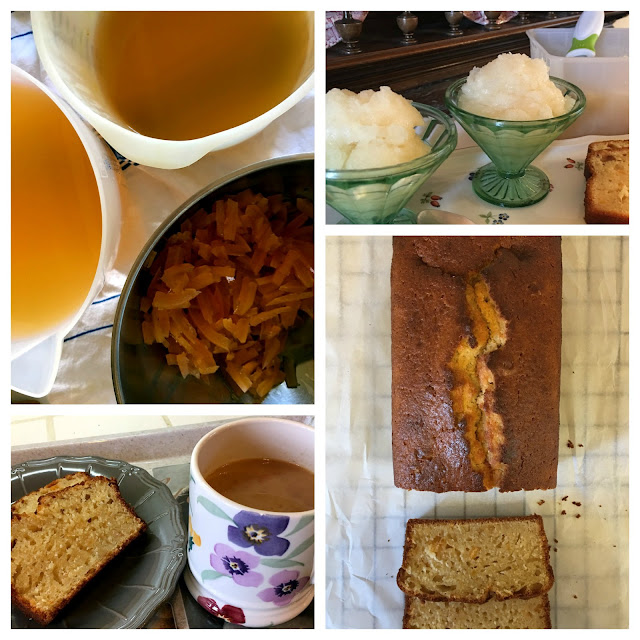 Thanks for travelling with me on my Mosaic Monday journey, each week my visits to your blogs take me all over the world seeing places and things I will possibly never experience for myself and all from the comfort of an easy chair. 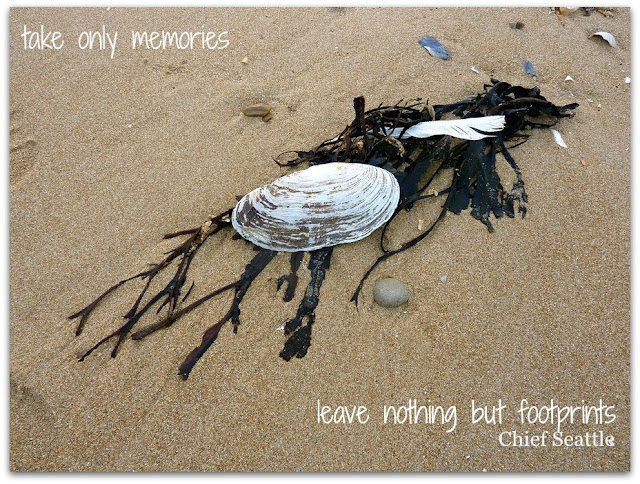