Although I haven't posted here for a while in the years that went before I loved being a part of the blogging community and making new friends around the globe.

So, I wanted to let anyone, who might have stopped by wondering what was new in Normandy, know that this will be NL's last post.
No more tales of country life or beach walks or la vie quotidienne en France, now it's time to say goodbye to our beautiful home as we turn the page and begin a new chapter. 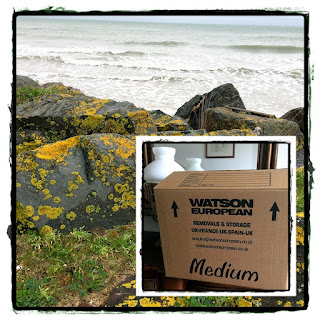 To use all the well worn phrases that one hears so often in the "media" the last twelve months have been a journey; a rollercoaster; of ups and downs and twists and turns but now we have finally returned to the land of our birth.
Merry Old England has opened her arms wide and welcomed us to a wonderful new home in the picturesque Derbyshire Dales.
To chronicle our new way of life I'm starting a new blog: "turning the page" which I hope will be up and running this week, it would be lovely if you stopped by for a visit if you get the chance.

Email ThisBlogThis!Share to TwitterShare to FacebookShare to Pinterest
Labels: Life in Normandie

The Senior Partner and I are spending some serious relaxing time on the beautiful island of Corfu.

Yesterday evening we drove into The Old Town for dinner at Rex a restaurant which has been serving wonderful food since 1932.
After dinner we strolled along the narrow cobbled streets soaking up the atmosphere.
Take a walk with me.........

Linking to Mosaic Monday. @ Letting Go of the Bayleaf 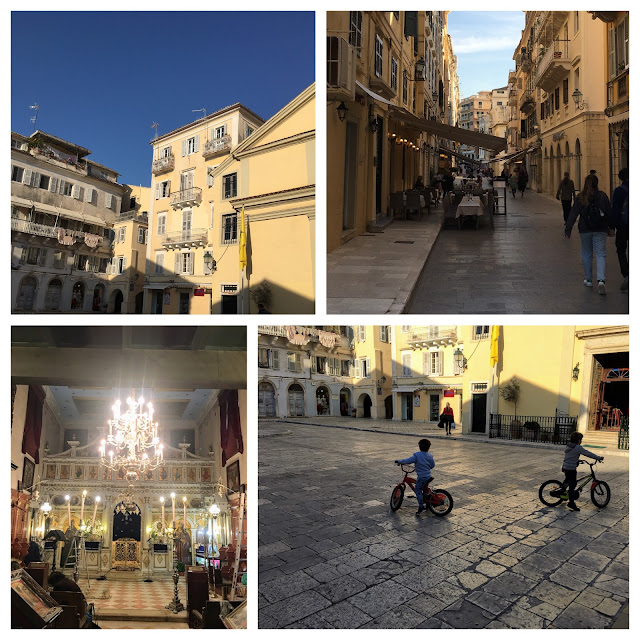 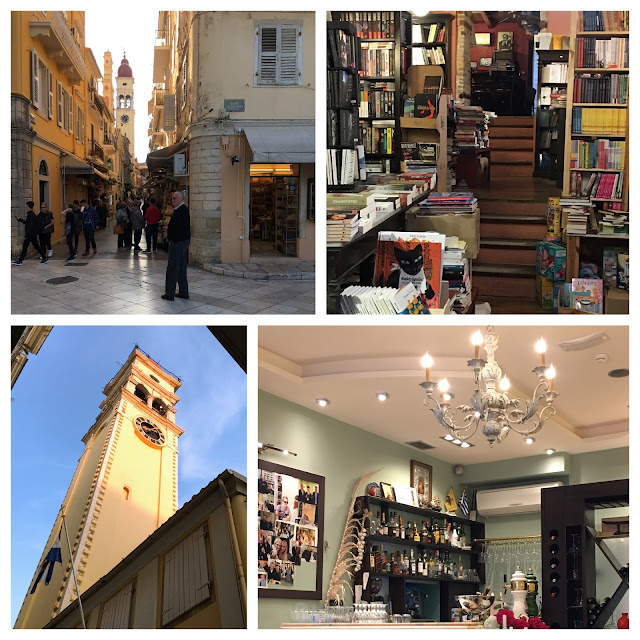 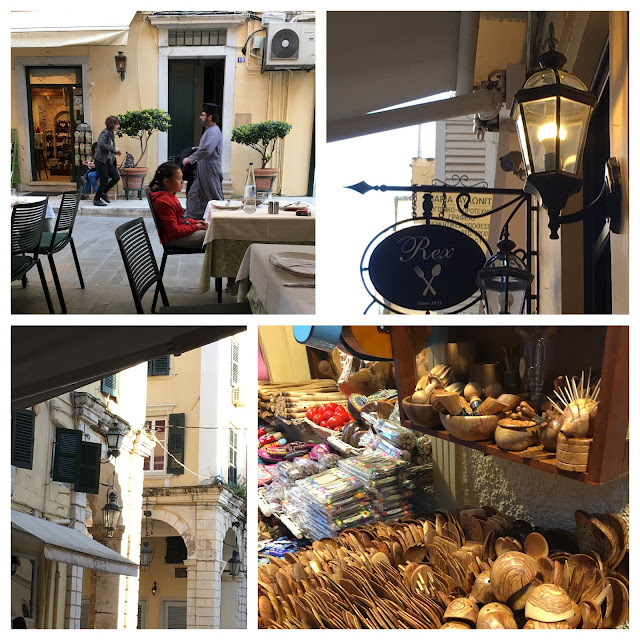 After a few weeks of neglecting the NL blog I've popped back on to wish all my friends and followers in blogland, especially the special ones who've shared the MM journey with me 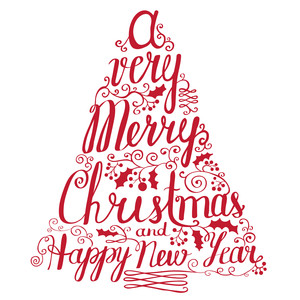 and to share a few snaps taken around the place this month as we prepared for the festive season.


Our time at Disneyland Paris was a wonderful occasion to celebrate and a great way of getting close family together for a pre Christmas treat. 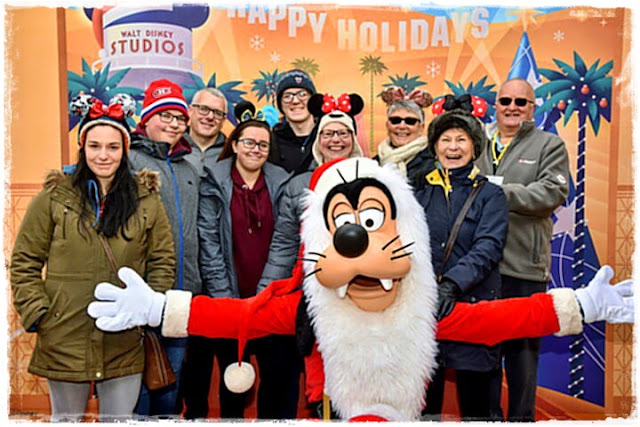 All the "girls" chose a set of Mouse Ears to accessorise their outfit, as a lark I popped mine on the Christmas tree for a Whatsapp silly photo before getting down to the serious job of decorating it. 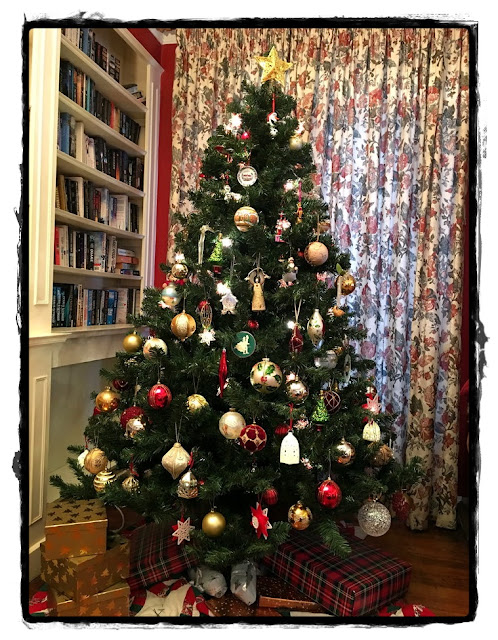 So, from these lovely chaps, the SP and myself 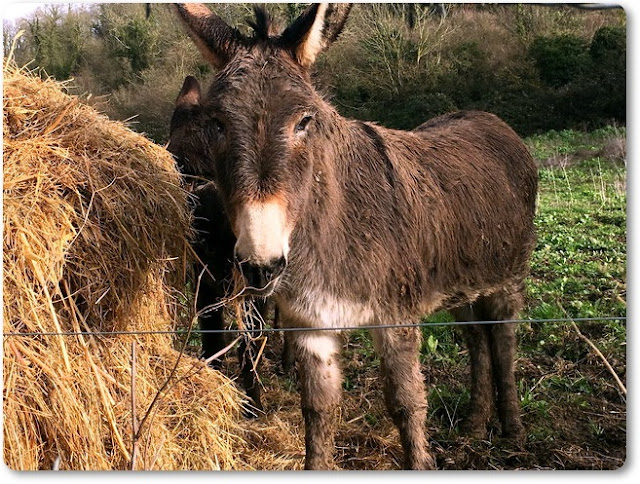 Today's post was prompted by a question from a recent visitor who was intrigued to know if our home had any stories to tell.

When we purchased the house over 20 years ago the seller didn’t really have very much to tell us about it's past.
Over the years I've done the occasional internet search but have yet to find anything relating to the house.
I did discover in the Rumsey Historical online map collection "The Carte de France 1750"which was published by four generations of the Cassini family from 1750 to 1815, it consists of 185 separate pages joined together to form a physical map measuring 39 feet by 38 feet.
By zooming in and looking closely I found St Marcouf with a drawing of a church!
Carte de France St Marcouf.
All we really know is that it is a former Presbytere, it's origins date back to circa 1600 and through the ages a succession of priests from the Church of St Marcouf du Rochy have lived here.
The floor of one bedroom in the original part of the building has a handmade terracotta tile floor and we were told that the Bishop of Bayeux slept there whenever his travels brought him this way.
Whilst renovating that room we discovered the numbers "1787" chiselled into the stonework surround of the ancient doorway which leads to the newer 18th c part of the house.
We have over the years made some enquiries into the origins/history of the house and heard from one elderly lady who remembered that during WWII the village children were gathered together for safety and slept on makeshift beds in “la chambre ancient avec le sol en terre cuite ancienne" - the bedroom with the old terracotta floor.
We've also been told that the house was occupied by Germans soldiers for a period of time and indeed it is well documented that during the weeks following D Day there was much fighting in the area as the Allies pushed inland, from the landing beaches, towards St Lo.
One mystery we have yet to solve is why there is an unmarked grave in the garden? We discovered the base and cross, overgrown with brambles and weeds, whilst clearing flower beds when we first moved here but no-one has been able to tell us who is buried there. One neighbour suggested we excavate the site but we decided to leave whoever is buried there to rest in peace.
Perhaps it was the final resting place of our resident ghost ?
That's right, we believe that the house is haunted and know when he’s around because we can smell the smoke from his cigarette. Several visitors have been aware of his unseen presence but everyone agrees that he’s a friendly ghost. 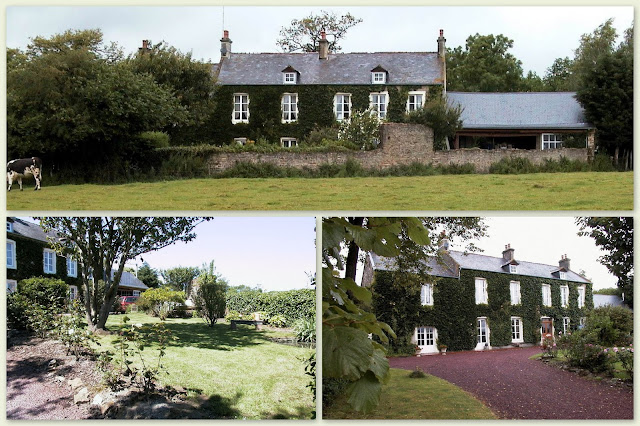 In 2011 I took part in a Room By Room meme that was great fun, click on the link below to see a little bit about how we brought love and life back to This Old House.
Staircase & Hall Renovation
I so wish that walls could talk, I would love to hear it's stories.
Joining Angie @ Letting Go of the Bay Leaf
as she hosts Mosaic Monday
for the first time today.
Posted by Maggie at 06:31:00 27 comments:

As October draws to a close and with November just around the corner I'm sharing a couple of my favourite things which happen in our little corner of Normandy at this time of year. 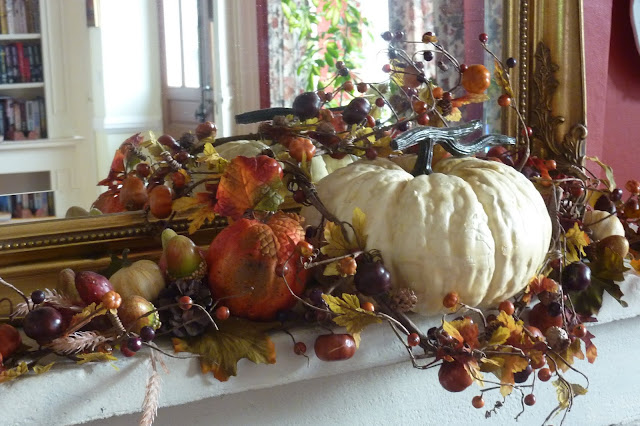 Trick or Treat - our neighbours children, taxied around by their patient parents, haunt the village as twilight falls. It's become a tradition to make their visit to le Presbytere the first stop of the evening but they only approach if we leave an outside light burning otherwise they leave us alone.
We always leave a light burning!
Halloween 2007 we were celebrating my Father's 80th birthday when they came to visit so we donned costumes to greet them. As they left to go a' haunting one of the local kids took our nephew Nicholas then aged 7 by the hand, to his relief we rescued him before they managed to whisk him away.
The nearby town of Trévières holds it's annual Fete des Pommes on the last Sunday in October it's an event we always look forward to especially this year as there is going to be a performance by a group of Breton dancers and I adore traditional Breton music, the pipes and drums have my feet tapping in no time at all. 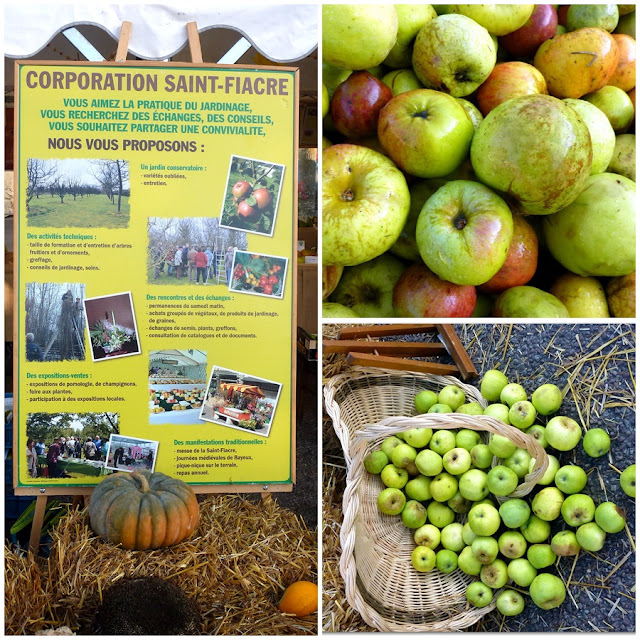 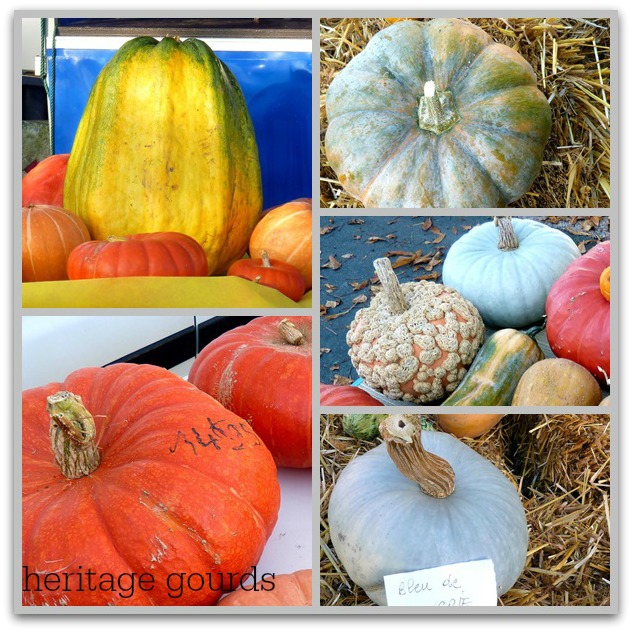 Those of us who live in Europe had to remember to put our clocks back one hour this morning, as summer time officially came to an end, I know in the US Daylight Saving doesn't happen until next week, hope everyone remembers!
This is my last post as host of Mosaic Monday.
I have thoroughly enjoyed my time as host, each and every one of the 107 posts has brought me good times, friendship and joy and I thank you all for your support.
Next week MM's new home will be @ Letting Go of the Bay Leaf hosted by Angie, see you there!
Just wanted to mention that there is an error in the inlinkz message, the link will open at 11.00 am as usual not 1.00 am.

Whilst holidaying in Tenerife recently we spent a wonderful morning out at sea with Blue Jack Sail on the Jeanneau Sun Odyssey yacht.
As part of an ad hoc flotilla of boats, all carrying passengers with just one thought in common "will we see whales and dolphins" we tacked from side to side trying to spot some of those wonderful elusive animals. 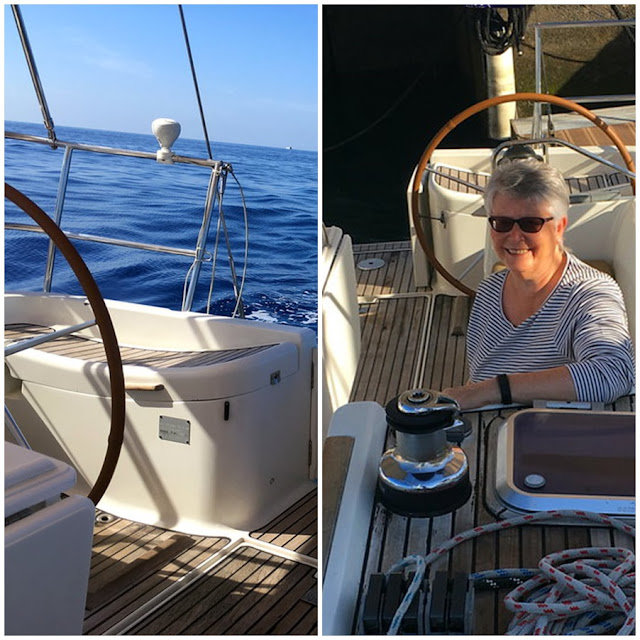 Suddenly there they were, a pod of about eleven short-finned pilot whales, swimming alongside us. They swim up to the surface usually in the mornings to rest in the warm shallower water after spending the night time feeding down in the depths. 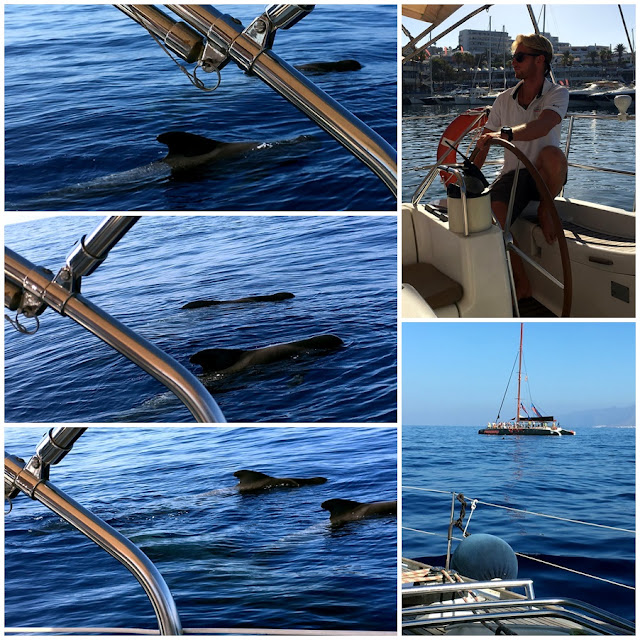 It is thought that there are around 1000 short-finned pilot whales frequenting the water off the South coast of Tenerife.
Their dorsal fins are unique, like human fingerprints, no two will ever be the same. They stayed nearby for quite a while before swimming off for more close encounters with the other yachts and catamarans out that morning.
As we sailed further along the coast our Captain suddenly spotted a large shape far in the distance and tried to get us up close. However another boat crossed in front of us and ruined our chances of photographing a migrating 25 metre long fin whale, a truly rare sight in these waters according to our Captain.
I took this photograph below of an illustration of a fin whale featured in a Blue Jack brochure which I found below deck.
After an adventurous morning we slowly motored back into port passing in front of our hotel on the way. The mountains behind are quite hazy but the two sides of the hotel can be easily seen. Family suites on the right and adults only on the left. 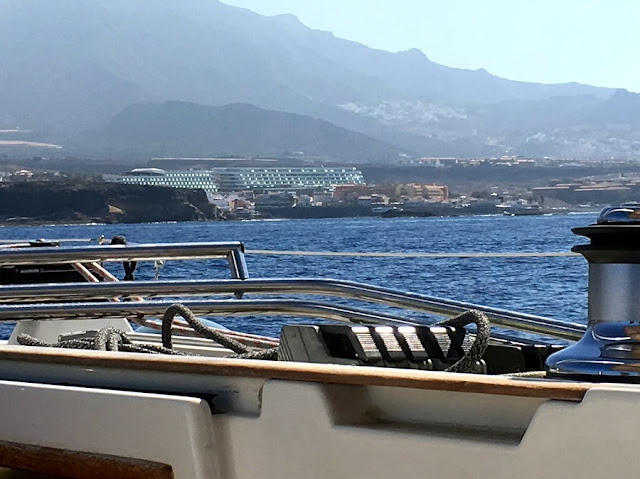 Todays post is the penultimate post from me as host of Mosaic Monday. Angie @ Letting Go of the Bay Leaf will begin hosting November 5th and I hope you will join me in saying a great big thank you to her for volunteering to carry our MM meme on "into infinity and beyond!" 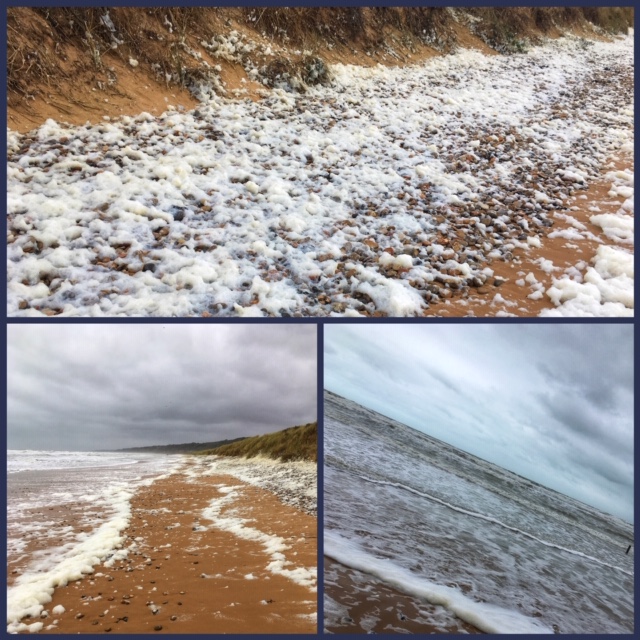 Bonjour Mosaic Monday folks.
Well, Plan B sort of worked last week didn’t it?
My scheduled post which I wrote whilst we were away went up on Sunday morning as planned, as did the link for you all to join in with, which was good because our internet service had  still not been restored by the time we got back from Tenerife.
Thank you for all your supportive comments, I can’t deny that it was quite challenging to get all the ducks lined up in a row from afar!
However, you’ve probably realised that I didn’t stop by your blog last week to comment on your mosaics and that was because the problem is ongoing.
We are still without internet service in the house, I’m using my iPhone’s personal hotspot for this post, and unless a techie comes to fix the problem soon I possibly won’t be visiting you this week either.
Mosaic Monday has been a very enjoyable part of my blogging experience for many years but all this palaver has got me thinking about the logistics of continuing to be the host in the future. As you know the SP and I love to travel, we already have something planned in November and there are a couple of other trips pencilled in the Diary for next year.
Although I will always want to participate in MM I’m wondering if there might be one of you, who enjoys our MM Club as much as I do, who would be willing to take the baton from me and become the new host so that we can keep this long standing meme running for many more years to come? 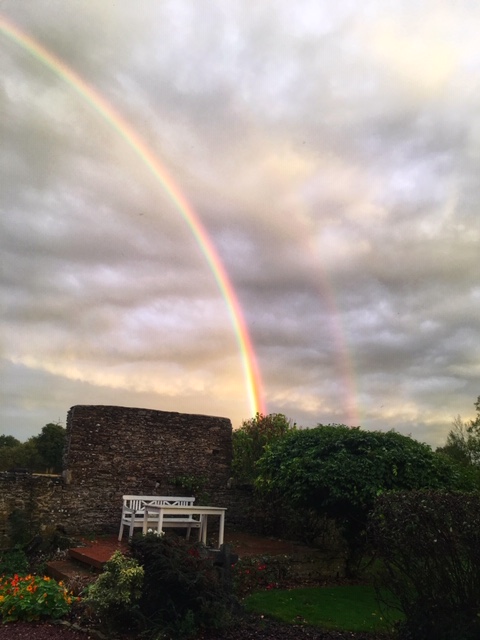 If hosting Mosaic Monday appeals to you just let me know in your comment or you can email me using the link on my sidebar and we can have a chat.