Last Friday, 6th June, the whole of Normandy celebrated the 70th Anniversary of the D Day landings.
You may have seen coverage of the celebrations on the TV news or in the newspapers.
Queen Elizabeth and the Duke of Edinburgh, Prince Charles & the Duchess of Cornwall, Prince William and the Duchess of Cambridge, David Cameron, President Hollande and many other Heads of State from around the world attended the commemoration services. 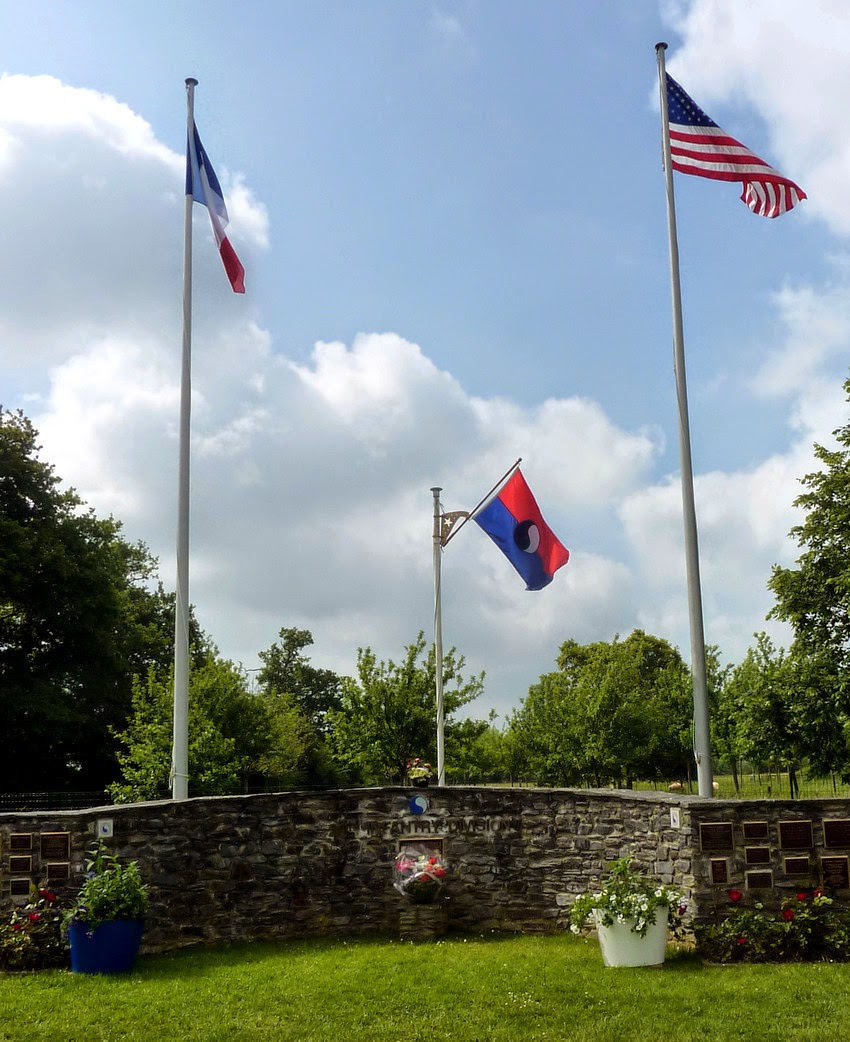 Locally, celebrations were more low key with flowers being laid at several memorial sites such as this one in the village of Saint Clair sur Elle, the village next to ours. 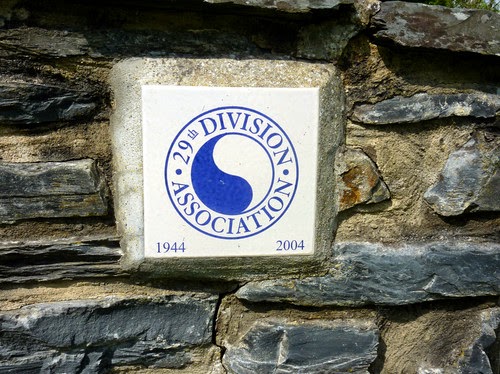 The 29th Infantry Division Historical Society website tell us the story of these brave men.


The 29th Infantry Division trained in Scotland and England for the cross channel invasion, October 1942-June 1944. Teamed with the 1st Division, a regiment of the 29th Division (116th Infantry) was in the first assault wave to hit the beaches at Normandy on D-day, 6 June 1944. Landing on Omaha Beach on the same day in the face of intense enemy fire, the Division soon secured the bluff tops and occupied Isigny, 9 June.
The Division cut across the Elle River and advanced slowly toward St. Lo, fighting bitterly in the Normandy hedge rows. After taking St. Lo, 18 July 1944, the Division joined in the battle for Vire, capturing that strongly held city, 7 August. 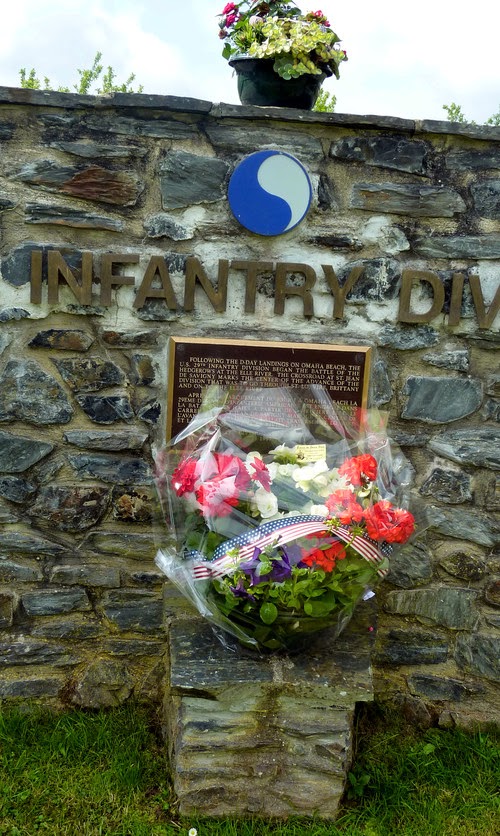 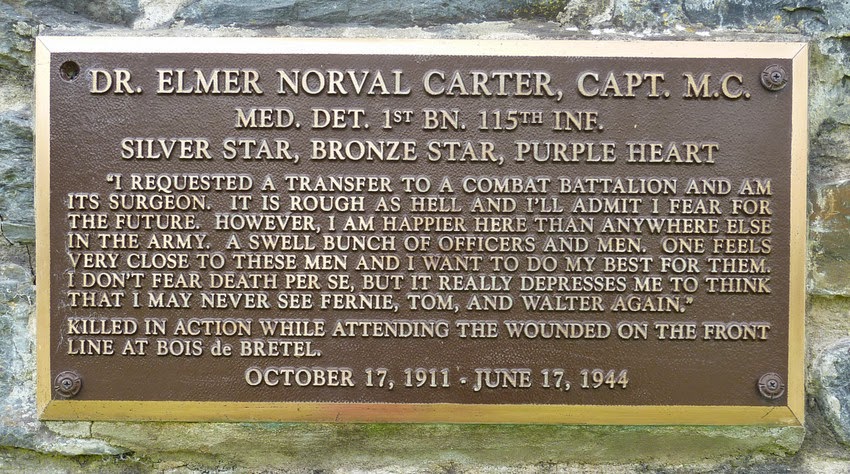 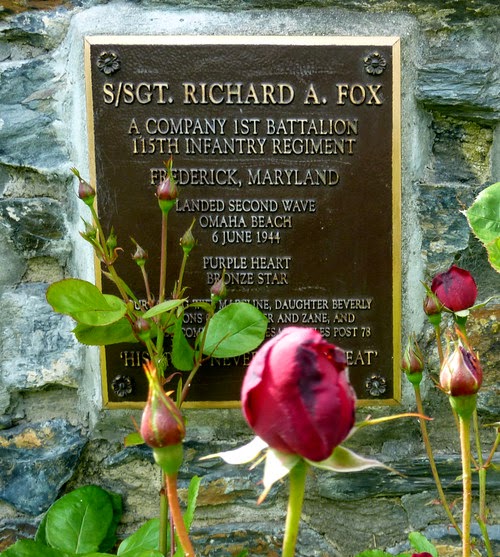 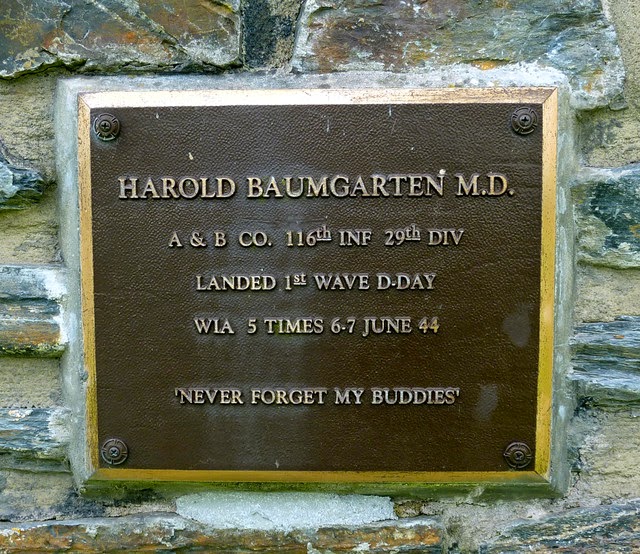 "This memorial is dedicated to the soldiers of the U.S. 29th Infantry Division.
It was constructed by personal initiative with the help of local volunteers who wished to express their gratitude to their liberators.
To those who pass, contribute to this work by never forgetting." 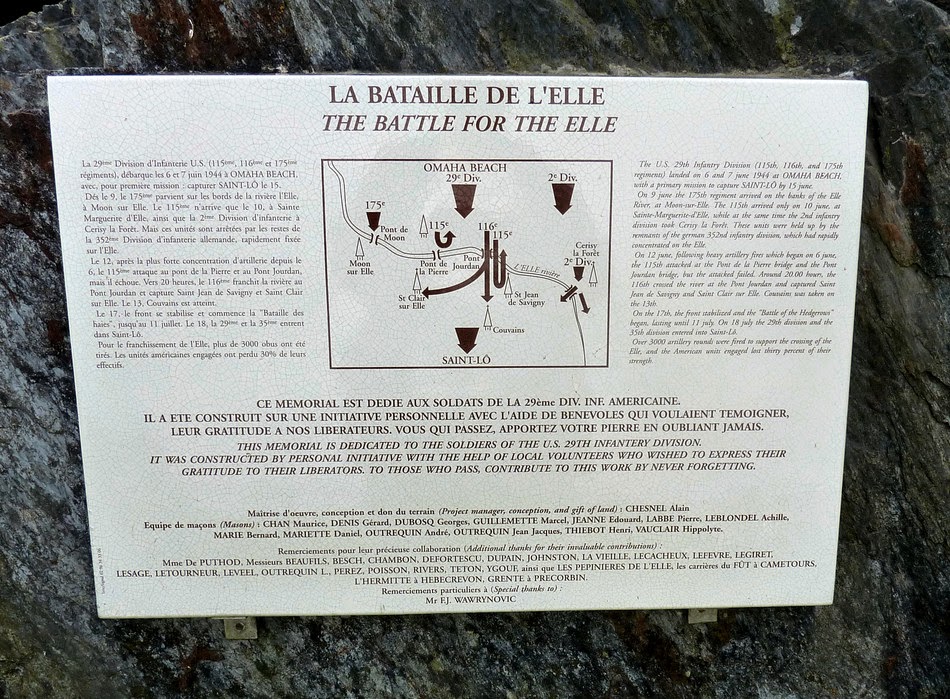 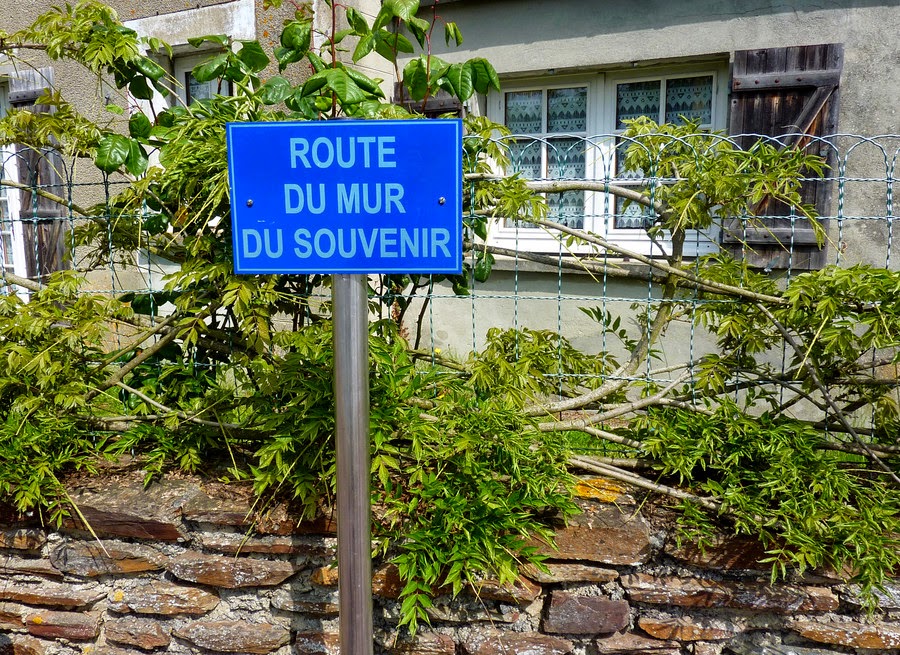 Mother nature remembers them too as these bright red poppies,
growing amongst the wheat,
in our neighbors field testifies. 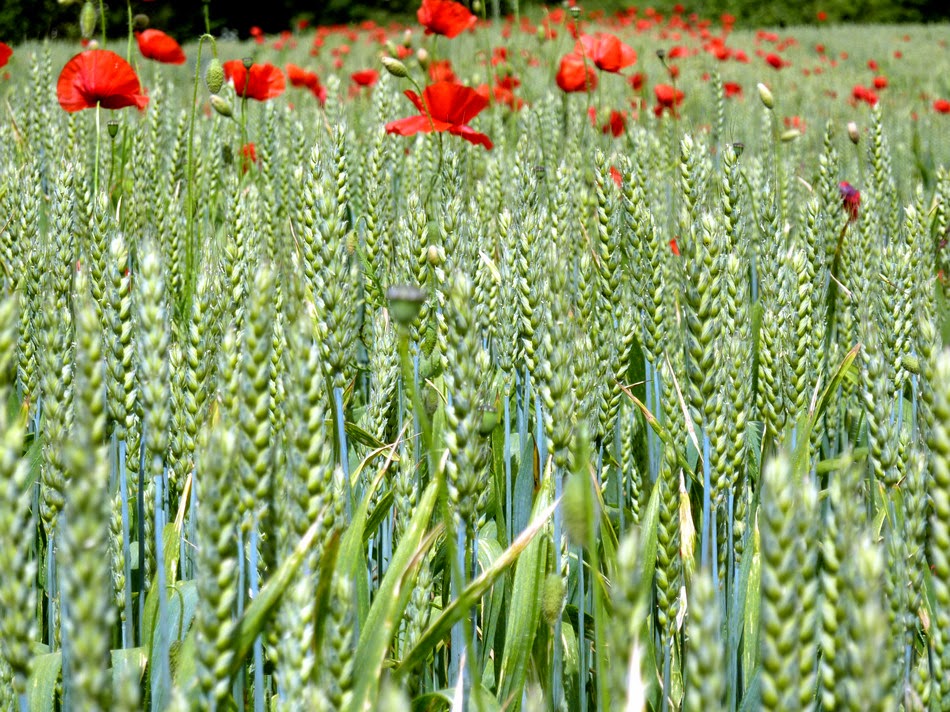 Bringing the potager back to life

May was a funny old month weather wise, cold and wet for the most part and not conducive to working outdoors in my potager garden or even to sowing seeds in pots ready for warmer days to arrive.
However, the last day of May dawned warm and sunny and my thoughts turned to all things veggie, a trip to the garden centre was called for. 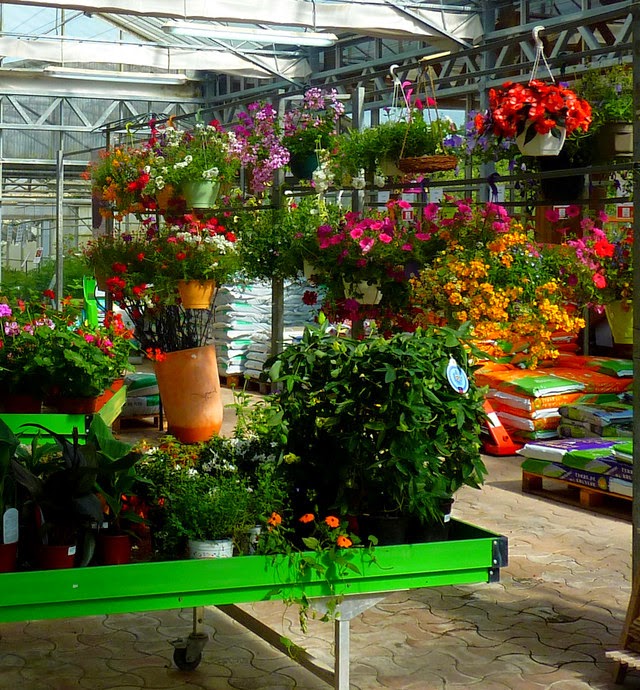 After a leisurely breakfast (it was a Saturday after all) and good long walk for M'selle Fleur we headed down to the Jardin 'Elle for some retail therapy of the plant variety. 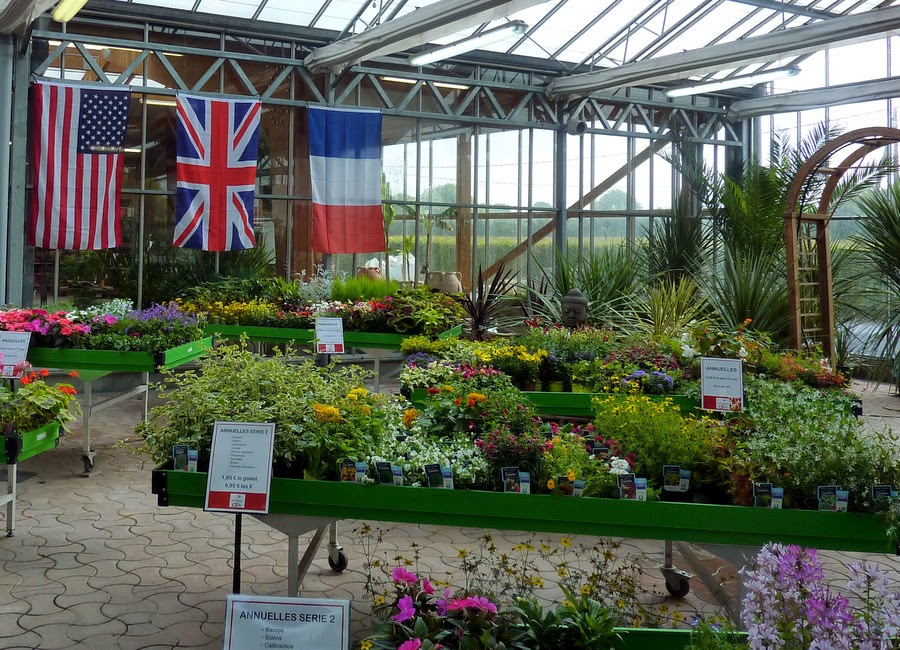 As you'll already be aware, I'm sure, in a few short days from now here in Normandy we will be celebrating the 70th Anniversary of the D Day landings and everywhere one looks you can see preparations being made to welcome the veterans and their families at this special time.
Even the gardeners at Jardin d'Elle are not immune it seems! The Senior Partner grabbed a trolley and we headed for the "potager" section of this vast place. Despite his "so called" aversion to anything that looks or sounds like a courgette Mr B was soon pointing out varieties of both zucchini and squash for us to try and very soon we had quite a collection of both. 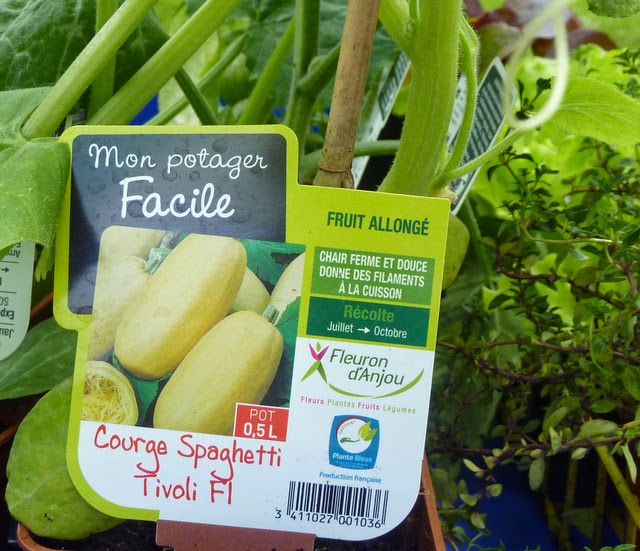 We also stocked up with lettuce seedlings and pots of herbs: thyme, lemon thyme and wonderful basil. 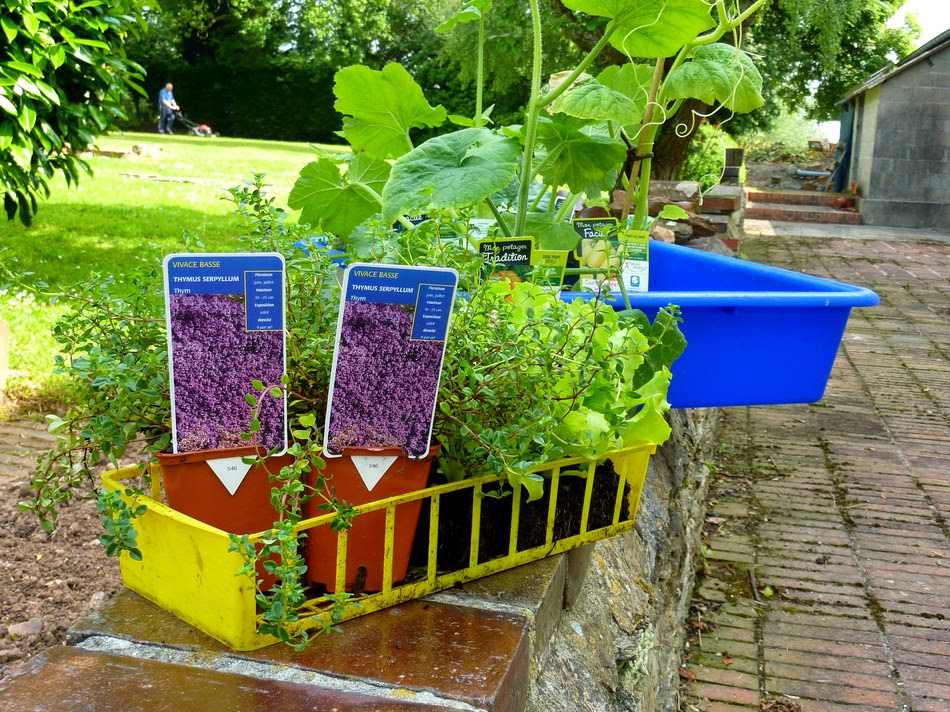 I can't visit Jardin d'Elle without wandering around the outdoor spaces and I always linger amongst the roses. 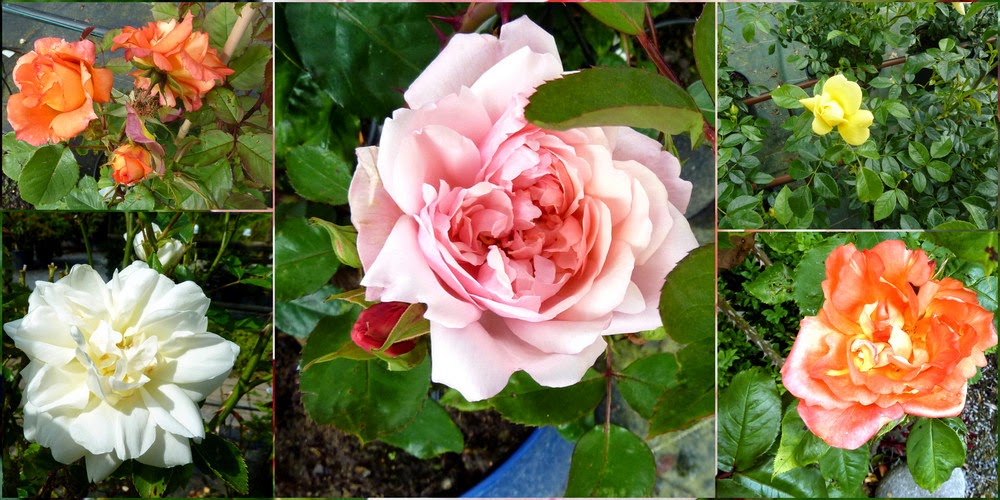 Meanwhile Mr B was tired from all the decision making and decided to rest awhile in this very comfortable looking swing seat.

Back home I couldn't wait to get started and began planting out whilst Mr B got on with cutting the grass. 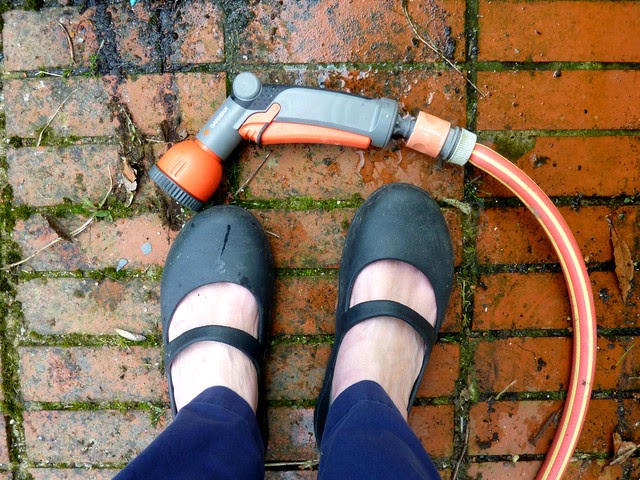 These are the best gardening shoes ever, Mary Jane Crocs, they laugh in the face of unwieldy hosepipes! 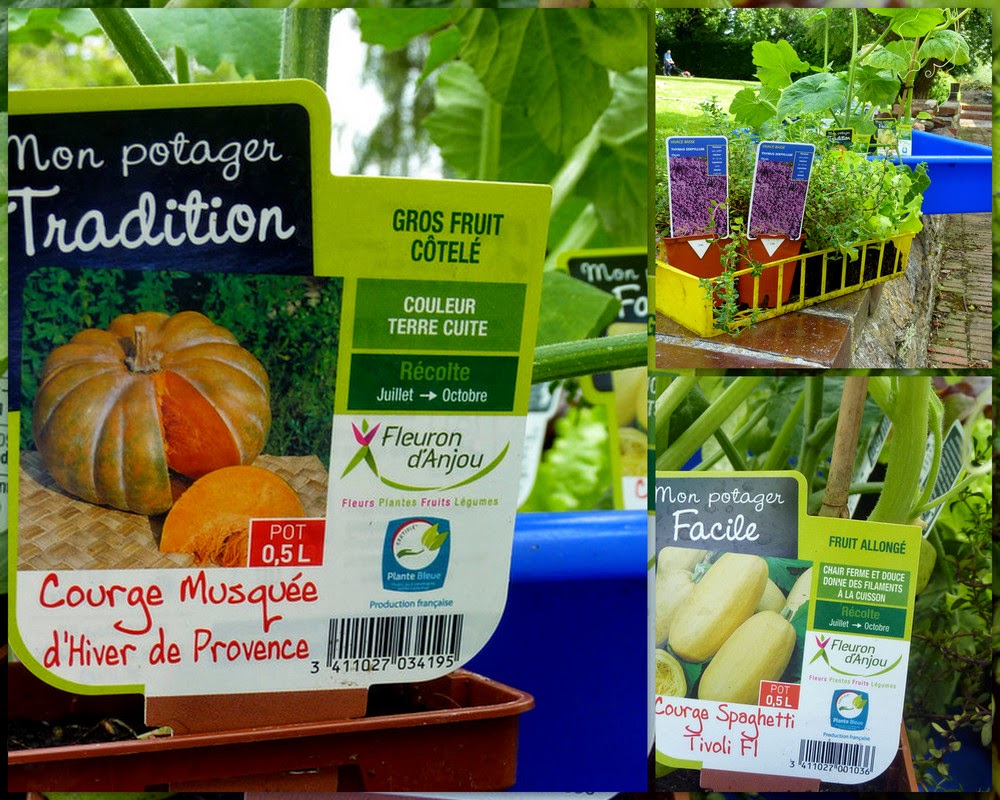 After all the hard labour neither of us could face making dinner so there was only one solution, pizza! 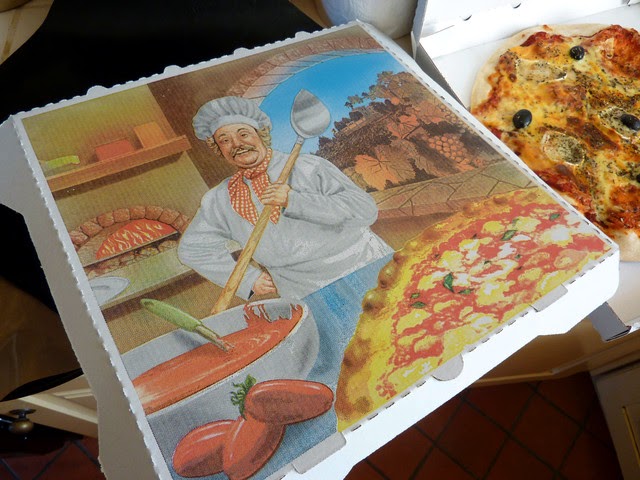 A takeaway treat that recently became available to us when a couple of entrepreneurs opened up this "pizza hut" in their front garden just a 5 minute drive away from here.

Sharing this post with Cindy who hosts
Amaze Me Mondays
on her delightful blog "Dwellings - the heart of your home"
which I discovered through my lovely friend Sarah @ Hyacinths For The Soul
Posted by Maggie at 05:39:00 13 comments: