T is for Tribute to D Day Veterans. 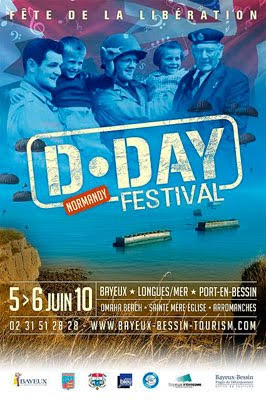 This coming weekend sees the 66th Anniversary of the D Day Allied landings in Normandy.
Therefore my T assignment for Mrs Matlock's Alphabe-Thursday this week is about some of the Tributes that ex- servicemen and women, and the families of the fallen will be attending here in my area.
Click here to read about the official tributes taking place.
However, not all of the Tributes this weekend will be on such a grand scale.
Throughout Normandy small towns and villages will be holding their own services of remembrance, I thought you might like to know about some of those. If the name of the town is highlighted you can click on the link to learn more.
On 4th Friday, 4th June, in Villers sur Mer, a bench will be unveiled by Mr & Mrs Don White from Australia to the memory of Private George WHITE, 9th Para, whose name is Commemorated on the Memorial close by the church.
The next day June 5th in Bavent (Le Mesnil)at 10:30hrs.there wil be a Service of Remembrance and Wreath laying at 3rd Para Brigade & 1st Canadian Para Battalion Memorials.
On the same day at 15:00 hrs in St Vaast en Auge a service will be held to commemorate the men who died after a navigational error when Horsa Glider LH324 crashed into the wood of the Manor Farm near the village.
In Gonneville en Auge at 16:00hrs there will be a ceremony at 9th Para Battalion Memorial and in Breville les Monts also at 16:00hrs a Commemoration and wreath laying at the crossroads Memorial and a vin d'honneur afterwards on the green opposite the Mairie (Town Hall).
Later that afternoon at 17:30 hrs Bures sur Dives a Wreath laying at the Captain Juckes RE Memorial and at the same time at the Merville Battery, Veterans of the 9th Para Battalion will march to the Official Ceremony.
Whilst at the Mairie (Town Hall) in the commune of Bénouville the Mayor Alain Lepareau will welcome the veterans, their families and friends at the Salle Polyvalente (Community centre) for a Band Concert and afterwards, an aperitif.
Perhaps the most poignat Tribute of all will take place in the small village of Colleville-Montgomery, when 86 year old Glaswegian Bill Millin, the Scots piper who led Allied troops on D-Day, will unveil a statue of himself.
In a quote from the Daily Record newspaper Glaswegian Bill, who previously saw a model of the statue, said: "It is very good of the French to do this for me. It is a good likeness, I was 21 then, very young."
Amongst the first to land at Sword Beach on June 6th 1944 Bill was ordered by Lord Lovat to play the pipes to rally troop morale.

Some other interesting web sites:
http://www.abmc.gov/cemeteries/cemeteries/no.php
http://www.memorial-caen.fr/portailgb/
http://www.travelsignposts.com/France/sightseeing/normandy-landings-pointe-du-hoc
Remember to stop by Jenny's blog Off On My Tangent for other T posts
Posted by Maggie at 20:02:00