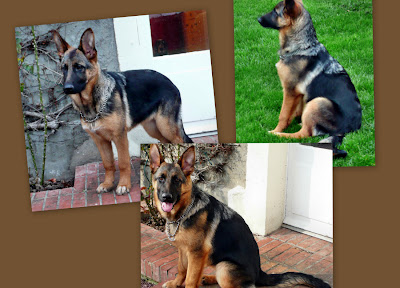 I believe it was Woody Allen who said
"If you want to make God laugh, tell him your plans".
Well, yesterday we hadn't planned on adding to our small family of Mr Ben, Mr B & me but then God laughed and now we are four.
O.K.maybe we were tempting fate by taking a drive over to Caen to visit the Chiot Expo taking place at the large exposition centre. 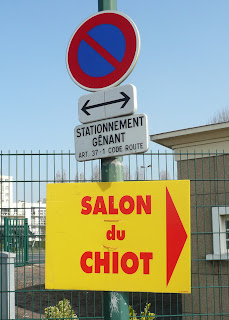 45 different breeds on show but how likely was it that one of the hundreds of wriggly little furballs, competing for our attention, would capture a heart? 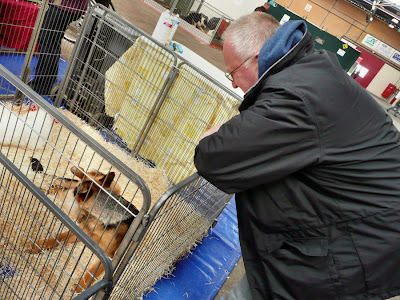 Can you hear God laughing now? 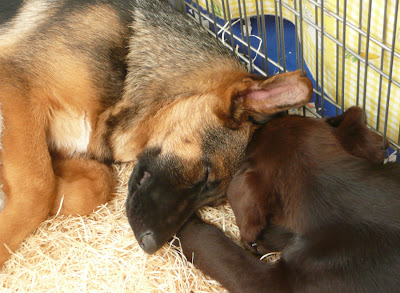 This is our new addition, a female pedigree Berger Allemand a.k.a. German Shepherd a.k.a Alsatian, almost five months old, born on the 14th October 2010. 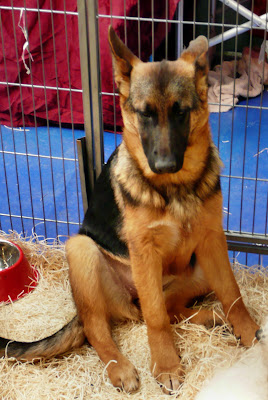 The breeder had not previously named her that honour went to the new owners, us, and so in keeping with the "one letter per year" system and F being the letter for 2010 we decided to name her Fleur.
Fleur de L'Ange Quentin to be precise!

Until 1926, there was no rule in France for naming a dog registered in the LOF. From this year, the S.C.C. decided that all dogs born in the same year would have a name beginning with the same letter, which would simplify the work of dog genealogists. The letter "Z" was excluded because one though that the choice of names beginning with this letter was not big enough in French. One should be aware that for several years after, some breeders didn't follow this new rule.


The only change to this system happened in 1972, when the Commission Nationale d’Amélioration Génétique (National Committee for Genetic Improvement) decided to standardize the yearly letters for all animals. Five letters (K, Q, W, X, Y) were removed, for the same reason which had lead to the exclusion of "Z" in 1926, and it was decided that "I" would be used for 1973.


Here is a table summarizing the dogs' names in France since 1926:


What more can I say, she's beautiful, intelligent, obedient and ours.
Joining Mary @the little red house for Mosaic Monday, click here, or on the sidebar button to see who else is participating this week.
Posted by Maggie at 03:21:00