The World of Downton Abbey - a Giveaway! 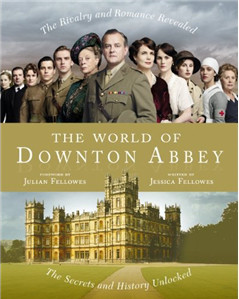 “Welcome to the world of Downton Abbey a place that has captivated an audience of millions, all following the lives of one family and their servants against a backdrop of a fading Edwardian society. All of us can recognize a familiar character amongst them; Violet the Dowager Countess, the old fashioned grandmother; Mary Edith and Sybil, the squabbling sisters; Robert and Cora, the loving parents; or Rosamund, the interfering sister-in-law.” 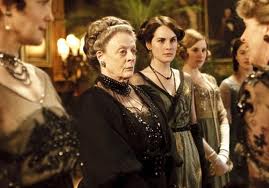 Jessica Fellowes the author of The World of Downton Abbey is an established writer and editor. She has worked for the Mail on Sunday and for four years was Deputy Editor of Country Life magazine.
"Downton Abbey portrays a world of elegance and decadence, a world of duty and obedience and a world of romance and rivalry: this companion book, full of rich historical detail, takes fans deeper into that period than ever before.
Step inside one of the most beautiful houses in Britain, past Carson the butler at the front door and into the grand hallway. Catch a glimpse of the family having drinks in the drawing room before dinner, dressed in their evening finery, whilst Lord Grantham finishes writing a letter in his study. Then climb the grand sweeping staircase to the maze of rooms upstairs and peak through Lady Mary’s open door to see Anna, her maid, tidying scent bottles and jewellery on the ornate dressing table. Follow Anna down the servants’ stairs and into the kitchens to watch Mrs Patmore frantically preparing dinner. Mrs Hughes keeps a watchful eye from her study and the world of Downton comes alive before you.
Experience the inner workings of the downstairs life and be dazzled by the glamour of upstairs life with profiles of all the major characters, interviews with the actors, behind the scenes insights and in-depth information on costumes and props."
Amazon review. 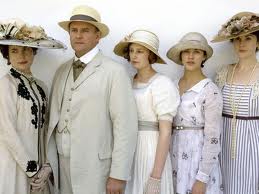 When Downton Abbey first appeared on British TV screens on Sunday evenings during the autumn of 2010 it was a huge success and received many awards and nominations and I was hooked!
The second series which aired last autumn and the Christmas special that followed were even better (no spoilers but who doesn't love a happy ending?) and I’m very happy that a third series has been commissioned and will be shown later this year.
To receive this beautiful book on Christmas morning was the icing on the cake.
The photographs throughout are wonderful and it is packed with historical facts and information about life in England before, during and after the First World War, and the changes wrought as a result of it. 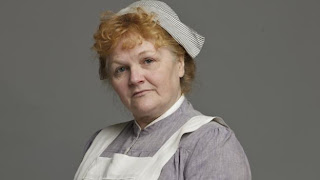 “Before the First World War, 1.4 million people were employed as domestic servants. It was one of the largest single employment groups – just outnumbering agricultural workers and coal miners – and was largely made up of women. Around 15 – 20 per cent of this number would have been working in the houses of the nobility and the landed gentry”. 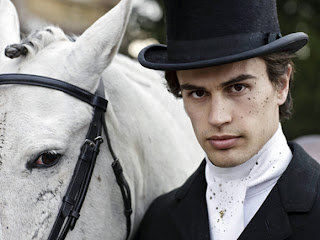 To win a brand new copy of The World of Downton Abbey (I’m keeping mine!) all you have to do is answer this question correctly.
In series one Kemal Pamuk, the son of a Turkish Diplomat, was a guest at Downton - how did he die?
Was it:
a) He was thrown from his horse whilst out riding with the Hunt
b) He choked on a fish bone during dinner
c) He suffered a heart attack whilst making love to Lady Mary 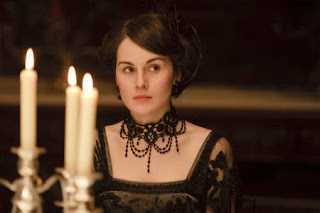 To receive 1 chance to win just leave a comment, answer the question correctly and your name will be entered into the draw twice.
The winners name will be picked at random and announced in my post when I join Laurie's Valentine's par-tay on Friday, February 10th.