Our second visit to Ironbridge last week was to the open air museum "Blists Hill Victorian Town" which opened in the early 1970's and is a continuing work in progress. 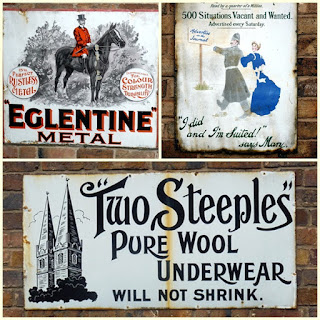 The "Town" is located in an area of the Iron Gorge owned in the 18th and 19th centuries by the Madeley Wood Company.
They operated a brick and tile works with huge blast furnaces producing pig iron on the site.
They also excavated coal, iron and clay which were then transported on boats up and down the Shropshire Canal.
It was an industrial works only, there was no town here originally.

As you walk out from the visitor centre you find yourself in a small Victorian town which has been created using some of the original ironworks buildings, replicas of buildings still standing elsewhere and some, such as the New Inn public house, which have been relocated from other areas of the UK. 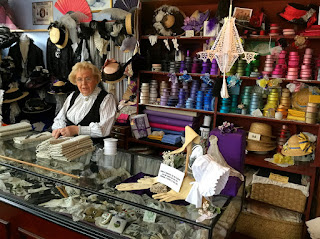 Inside the shops you meet costumed demonstrators who will happily chat to you about their work and the Victorian way of life.
We enjoyed meeting this lady in the Drapers and Outfitters shop.
On the morning we were there she was making up lengths of ticking fabric for pillowcases, after that she told us she would be busy sewing maids aprons. 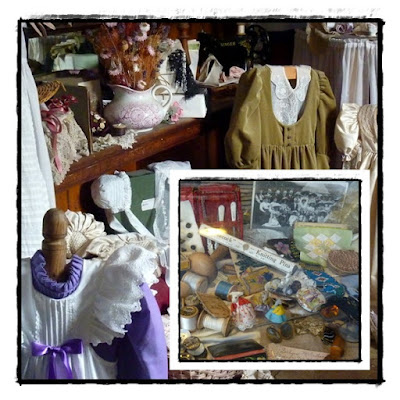 On down to Lower Town and the Ironworks, Blacksmiths and the Fairground, past a small cottage where the Doctor rents a room in which to hold his weekly surgery. 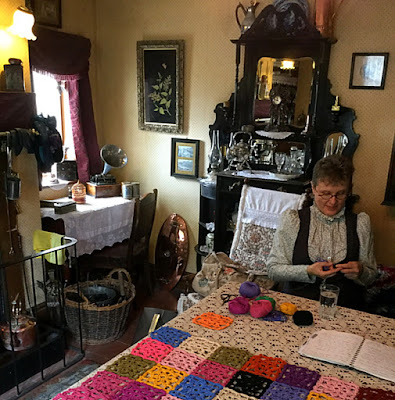 .
As we approached the Green we heard the school bell and the voice of Stirchley Board Schools Headmistress, Miss Burke, calling out to all the tardy schoolchildren - "hurry along and get inside" lessons were about to start. 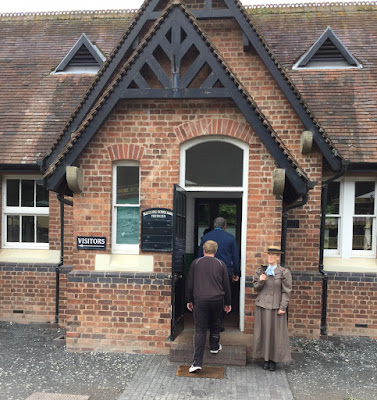 At morning assembly hands and nails were inspected (I was wearing polish so had to stand in front of the class with one other miscreant whilst Miss Burke told us what bad girls we were!)
Then the class had to repeat our 3, 8 and 9 times tables and answer questions about the famous Ironbridge.
When was it built, how much iron was used and how much did it cost?

a) 1779. b) 378 and a 1/2 tons. 3) £6000.
We then sang a favourite hymn "All Things Bright and Beautiful" (all 3 verses!) and "God Save the Queen" (Victoria) before being sent home to our mothers.
I think everyone in Miss Burke's class that morning thoroughly enjoyed the time spent with her, she is the absolute Jewel in the Crown of Blists Hill Museum. 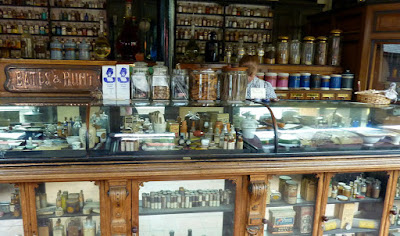 Just a few of the shops in the High Street, Upper Town and along Quarry Bank : Bank, Grocers, Chemist, Iron Merchants, Post Office and Stationers, Sweet Shop and Cobblers.

As you walk through the village you pass the Boys Brigade Hut, Stables and Pleasure Garden a place to sit and contemplate how our lives today differ from those of our Victorian ancestors.


Today is the day we leave England and head home to Normandy, we'll be travelling most of the day and so I may not get to visit you until this evening or perhaps even tomorrow but I will stop by as soon as I can!
An InLinkz Link-up
Posted by Maggie at 21:30:00