A friend, Sarah from Texas, commented recently on a book which is sitting on my Shelfari Book Shelf at the side of this page, The Constant Princess by Phillipa Gregory, a novel about the life of Anne of Cleves.

I have read most of Phillapa Gregory's historical novels and have to agree with Sarah that this is one of her best.


Today I added two new titles to my book shelf, "In the Garden of Good & Evil" by John Berendt and "More Than Mercer House: Savannah's Jim Williams & His Southern Houses".


I'm sure some of you will have heard about "the Savannah book" even if you haven't yet read it, and if you are considering attending the QCI meeting in 2010 then you must read this book!!

The book introduces us to a variety of Savannah "characters" the most interesting, in my view, being Jim Williams 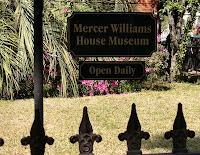 an antiques dealer who saved and restored over 50 houses in a career that began when he was 24 and which spanned 30 years.

He is however, best known as the only person in the state of Georgia ever to be tried four times for the same crime - the alleged murder on May 2, 1981 of his assistant, Danny Lewis Hansford, in Williams's home, Mercer House.
Jim Williams was finally acquitted of the charge and continued to live at Mercer House until his death on January 14, 1990.

Construction on Mercer House, situated on Monterey Square one of Savannah's prettiest, was begun in 1860 by General Hugh Weedon Mercer the great grandfather of the songwriter Johnny Mercer.
After the Civil War, circa 1868 the house was completed by it's new owner John Wilder. 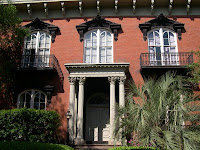 We were lucky to have been able to tour the Mercer Williams House, as it is now known and it is an absolute jewel of a house.


On the cover of Berendt's book is a picture of "The Bird Girl" statue which once resided in Bonaventure Cemetery but can now be seen in the Owens-Thomas House, a part of the Telfair Museum of Art in Savannah.

Email ThisBlogThis!Share to TwitterShare to FacebookShare to Pinterest
Labels: Books