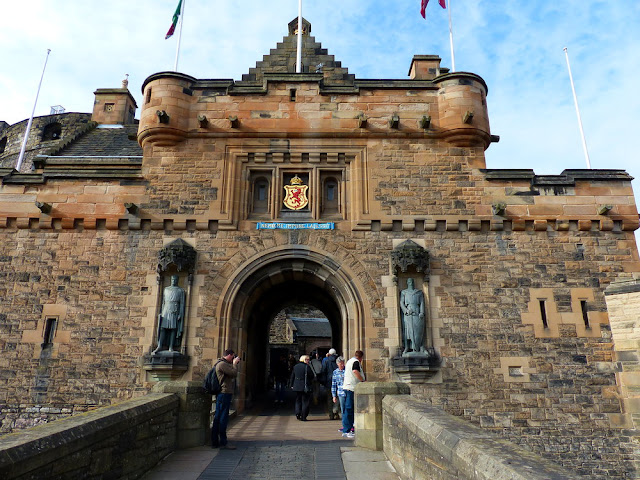 Today I'd like to take you on a brief tour of Edinburgh Castle.

artist - William Brassey Hole
(Detail from a frieze in the entrance hall of the Scottish National Portrait Gallery, Edinburgh, photographed by uploader, CC BY-SA 3.0 Wikipedia)
Here's what I found about Malcolm from wikipedia.
He was the eldest son of Duncan I who became King of Scotland in 1034.
Duncan's reign was cut short when he was murdered by Macbeth in 1040.
Macbeth ruled for 17 years until he was killed in 1057 by Malcolm.
Macbeth's stepson Lulach was crowned King and was murdered by Malcolm in 1058.
Malcolm was crowned King in 1058 and ruled until his death in 1093
when he was succeeded by his eldest son, by his first wife, Duncan II. 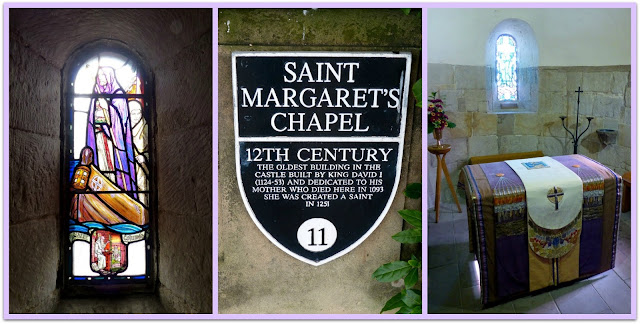 Saint Margaret's Chapel, 12th Century.
The oldest building in the Castle built by King David (1124-53)
and dedicated to his Mother who died here in 1093.
She was created a Saint in 1251.
There are many wonderful things to see within the Castle grounds, click here for more info. 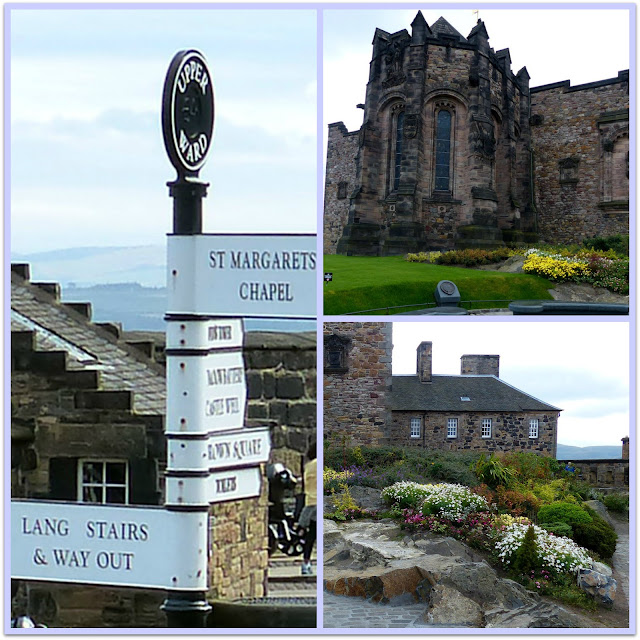 From the Edinburgh Castle website:
The Crown Jewels.
The crown jewels of Scotland are a breathtaking sight.
Known as The Honours of Scotland they are displayed in the Crown Room and are surrounded by a special exhibition.
The sceptre was presented to James IV by Pope Alexander VI in 1494 while the crown was first worn for the coronation of James V’s wife Mary of Guise in 1540.
They were first used together for the coronation of Mary Queen of Scots in 1543.
Their past has been turbulent. They were removed and hidden from 1651-60 to keep them from Cromwell’s Parliamentarian army.
In 1707 they were locked in a chest and sealed away after the Treaty of Union between England and Scotland.
In 1818 they were rediscovered by the novelist Sir Walter Scott, and with them a mysterious silver wand.

Sadly we didn't have enough time to see the Crown Jewels when we visited in September 2014 but we did enjoy the Regimental Museum of The Royal Scots Dragoon Guards. 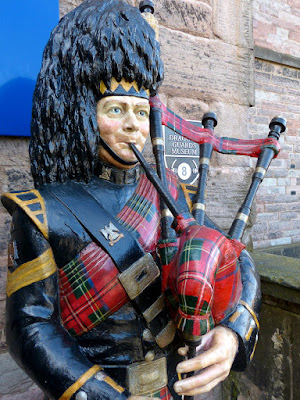 At 1pm every day (except Sundays, Christmas Day and Good Friday) the One o'clock gun is fired and is a great draw for visitors to the Castle.
Dating back to 1861 it's original purpose was to allow ships sailing in the Firth of Forth
(just visible in the background of my photo)
to set the Maritime clocks by which they navigated the worlds oceans. 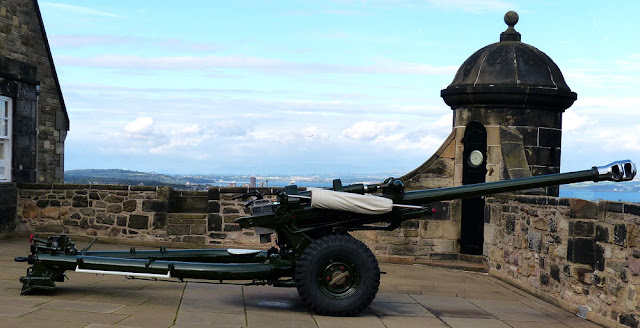 More from the Edinburgh Castle website:
Standing on its great rock, Edinburgh castle dominates Scotland’s capital.
Great events have taken place within its wall and it has witnessed many sieges.
To control the castle was to hold the keys to the kingdom.
Iron Age warriors understood the rock’s military potential and built a hill fort here. Our oldest poetry tells of a war band which feasted here for a year before riding to death in battle.
During the Wars of Independence the castle changed hands many times. In 1314 it was retaken from the English in a daring night raid by Thomas Randolph, nephew of Robert the Bruce.
The castle was home to kings and queens. Queen Margaret (later St Margaret) died here in 1093, and Mary Queen of Scots, gave birth to James VI in the royal palace in 1566.
Her great-great-great grandson Charles Edward Stuart - Bonnie Prince Charlie - captured Edinburgh but couldn’t take the castle during the 1745-6 Jacobite rising.
In 1996, the Stone of Destiny, on which kings were enthroned for centuries, was returned to Scotland and is displayed in the Crown Room.
From the 1600s onwards the castle was a military base with a large garrison.
Later it also held prisoners of war.
Parts are still a military base, but the castle is now a world-famous visitor attraction and a key element of the Edinburgh World Heritage Site.

When you stand on the battlements you are treated to a fantastic view
over the city across to the Firth of Forth in the distance. 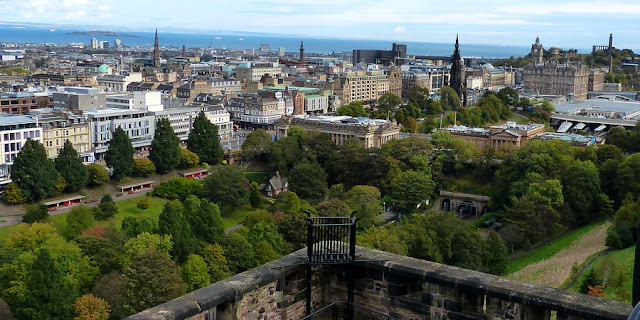 There are visual aids here and there along the battlements
indicating various parts of the city. 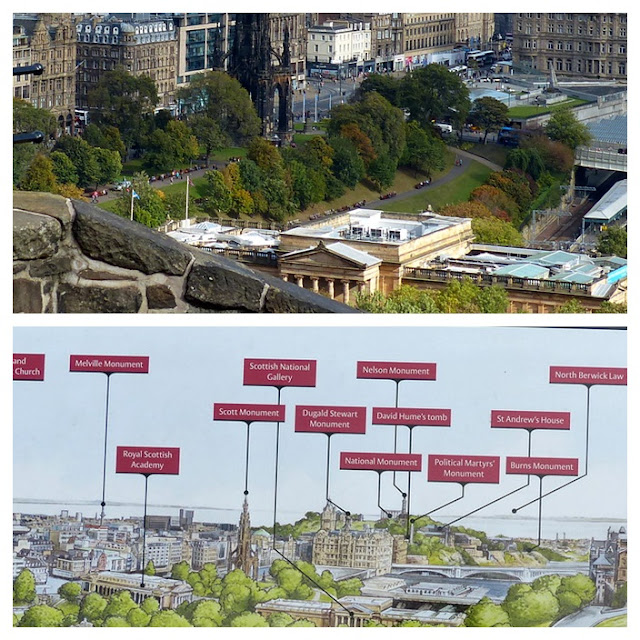 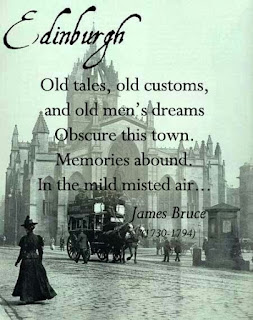 We're keen to go back and experience some more
of what the city has to offer, one day.
Perhaps arranging our next visit to coincide
with the Edinburgh Film Festival or Edinburgh Fringe.