Sunday Favourites Re Run with Chari. 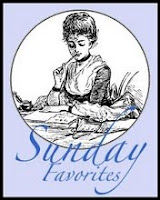 Happy Mothers Day to all.
Here's a chance to see how we dealt with a mini drama but really not a crisis, a couple of years ago when my surrogate child (!) Mr Ben fell in the pond! 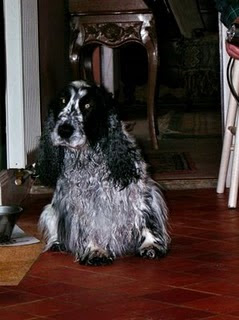 Breakfast preparations came to an abrupt halt at 07.45 am today when as I briefly glanced out of the open door I saw our cocker spaniel, Ben, struggling but failing (!) to climb out of the pond in our front garden!
He must have walked around this pond at least 5 times a day since he came to live at the Presbytere (almost 8 years ago) and this was the first time he had ever taken a dip.
I don't know who received the bigger shock him or me, or maybe it was my other half, Roger, as I screamed "Ben's fallen in the pond".

Now, this pond isn't an attractive feature in the garden, the only thing pretty about it is that it's pretty yucky, so when I finally yanked Ben out of there he was in a very digusting state, not what you want to deal with just before your petit dejeuner. I'll spare you the details, suffice it to say we gave him a very thorough bath using the outside garden hose & masses of doggy shampoo.

Roger then dried him off using my hairdryer until he resembled his former self.

The pix show just what Ben thought of that. Hope you're day get's off to a better start than ours.

Linking through to Chari's @ Happy to Design blog today and her Sunday Favourites Rerun meme, a super idea which allows us to revisit previous posts.