I'm combining two themes today and linking to Shadow Shot Sunday @ Hey Harriet's blog in Oz and Sesonal Sunday hosted by The Tablescaper.
There is a slight chill in the mornings in Normandy now as we head into autumn, it's time to start thinking about putting the potager to sleep, I suppose.
I have been spending time this week clearing out the raised beds, but the haricot beans are still coming through and there's plenty of lettuces to enjoy. 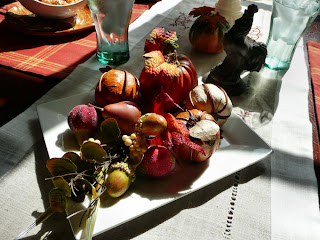 After having nothing but green tomatoes for weeks and weeks there were suddenly masses of over ripe red tomatoes on the vines, so for lunch yesterday I made Zuppa di Pane e Pomodoro, (tomato and bread soup).
I found the recipe in Katie & Giancarlo Caldesi's cookbook "The Italian Mama's Kitchen", which is full of wonderful authentic home-style recipes.
Click on the link to visit La Cucina Caldesi Cookery School.
I'm ashamed to say that this cookbook has languished on the shelf for over three years and although I've dipped in and out, to read the recipes and salivate over the stunning photography, this was the first recipe from it that I have attempted.
I'm not sure if there was a typo in the ingredients list but I found that 200ml of vegetable stock was nowhere near enough liquid for the quantity of bread suggested, so I added a 200ml bottle of tomato juice and all of the liquid obtained from deseeding the tomatoes during prep.
Was it good??

I thought so, it's certainly my sort of comfort food but although he finished his bowlful Mr B said that he wouldn't order it in a restaurant. 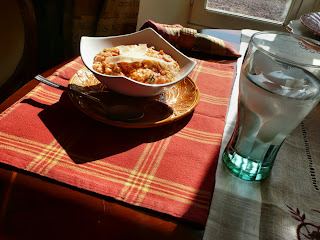 Email me if you'd like the recipe, nevertheless.
Posted by Maggie at 07:32:00